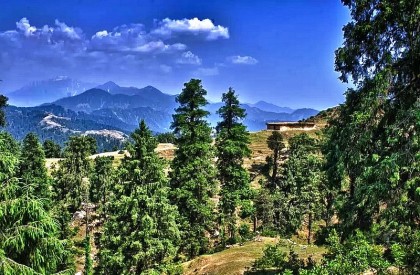 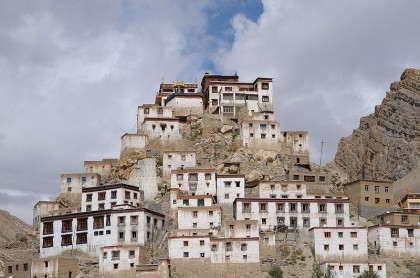 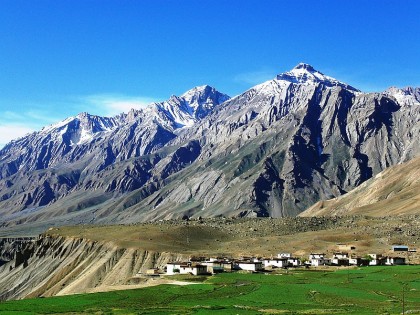 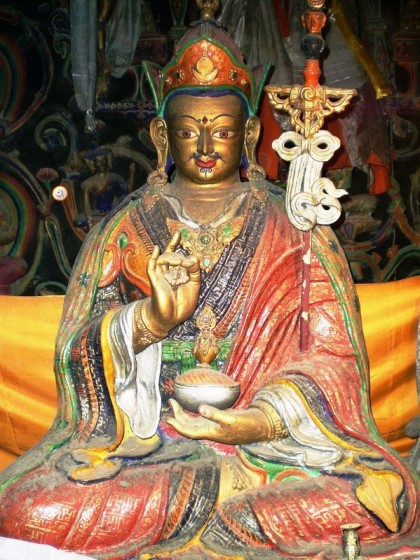 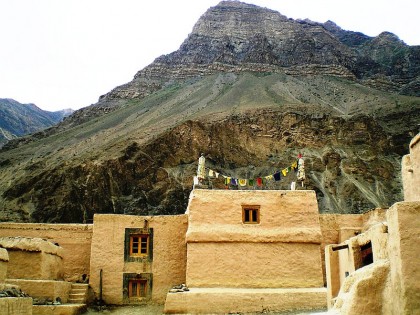 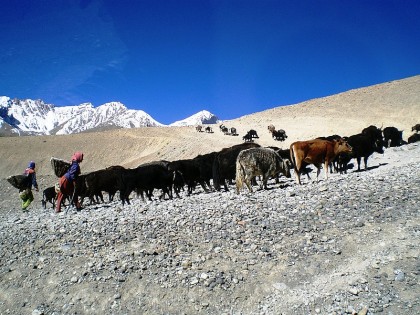 Himachal Pradesh, located far amidst the Himalayas in northern India, amazes with its exotic valleys, fragrant orchards, snowy mountain peaks and rushing brooks. The majority of this mountainous Indian state is heavily forested, and reveals at first glance, why some regions of this part of the world are often called "the Indian Switzerland". The beautiful nature can be explored in two national parks and 32 conservation areas for flora and fauna, and holds mountain lakes with a mystical touch and slopes strewn with boulders, with secluded mountain huts for travelers as a gem of landscape diversity against white mountaintops.

On an area of around 56,000 km² - which is a little larger than the German state of Lower Saxony and nearly one and a half times as big as Switzerland - in the middle of the last century 31 principalities were joined together, what may explain the wide diversity of cultures of the native hill tribes and their languages. Above all, it is also the peaceful openness of this Indian state, which offered the in 1959 exiled Tibetan government refuge, and until today grant to it and its Dalai Lama, in the city of Dharamsala, the possibility to live and have their government. This of course also revived Buddhist traditions in the country, and enriched language, culture and architecture, especially in the scenically rather barren district of Spiti.

Here in Spiti, but also in some of the neighboring districts, the colorful prayer flags and ornate temples of Buddhists repeatedly surprise the eye, as well as the traditional, brightly orange robed monks in the barren mountains. Nevertheless, especially in the southern regions of the state, the major part of the population of Himachal Pradesh is of Hindu faith, and the temples carved out of wood, and the lavishly decorated shrines are in no way inferior to those of their brothers of Buddhist faith, inviting pilgrims and travelers to linger, and to admire the elaborately designed buildings.

Likewise one should visit the palaces of the former rajas (the princes) in the wild mountain landscape, some of which were partially  restored with affection, and tell the story of ancient India. Meet with us the many Hindu and Buddhist cultures of the indigenous hill tribes, and explore the mountain scenery from the lush fertile monsoon area to the dry stone deserts on the border with Tibet.

For the districts Kullu, Manali, Shimla, Palampur and Dharamsala: March to September.
For Spiti, Lahaul & Kinnaur: From July to October.
The monsoon starts in late June. In July and August the heavy rainfall cause south of Spiti and Kinnaur erosion and landslides.
The best time for trekking is from May to end of October.

The people of Himachal Pradesh are deeply religious. Common is the in the south the Hinduism with still intact caste system, and the authentic Tibetan Buddhism in the sparsely populated northeast. One encounters a mixture of very different ethnic groups and communities. Approximately 93% of the total population are involved in agriculture. But the largest part of the country is owned by the higher Hindu castes like the Rajputs, Brahmins and Mahajans. There are also these castes, which dominate the economic and political life of the state. About a quarter of the population belong to the lower castes.

They are mainly craftsmen who quite naturally respect the members of the higher classes, something which is deeply rooted in their Hindu tradition. People possess a strong belief in the laws of karma - that good as well as the bad deeds are shaping the lives and are responsible for the next incarnation. The crime rate is correspondingly low, therefore the houses are, for example, generally not locked. Idle land in and around the villages is considered communal property (Shamlat). Many people in Himachal Pradesh, whether Hindus or Buddhists, find that nature has supernatural powers. The Himalayan mountains are gods; the forests, streams and rocks are alive with mystical powers.

Moreover people also worship local gods and protective entities, fairies and other supernatural beings. Animal sacrifices are an important part of religious rites, and are common at weddings, funerals or harvest festivals. The gods are summoned through dance and music. Guru Padmasambhava, who spread Buddhism in the 8th century in Tibet, lived for a time not far from Mandi, a central district of Himachal Pradesh. Here exists even today a temple dedicated to him. Lamas guide interested visitors in meditation and mantra recitation, they give spiritual advice, predict certain events and are practicing Tibetan healing . As diverse as the origin and the tradition of the people is of course the world of languages.

The official language is Hindi, which is spoken by the majority of the population. In addition, however, there are many additional dialectic mother tongues: within this a widespread language called Pahari, there are significantly different forms of Sanskrit. In Spiti, Kinnaur and Lahaul a language is spoken, which is related to Tibetan, a dialect of Ladakhi. One can usually also communicate in English.

The popular recipes are influenced from Punjab and Tibet. In addition to the staple food rice, chicken curry, lentils and vegetable dishes with pickles belong to the daily food of the locals. Besides this, local specialties such as pateer, chouck, bhagjery and chutney are widely used. Popular are also Tibetan dishes such as momos (dumplings with meat or vegetable filling), chowmein (a noodle dish) or thukpa (noodle soup). There are also many more local specialties. In Spiti, roasted barley flour (tsampa) is the staple food. Also as a European traveler, one can eat deliciously in Himachal Pradesh, the selection offers something for every taste. It is important not to consume unpeeled or uncooked fruits and vegetables, because the widespread bacteria here are alien to our organism.

The height differences in Himachal Pradesh are quite pronounced, and the topography brings forth a wide variety of vegetation and wildlife. Until about 900 m above sea level the climate is subtropical, and rainforests of teak, fig and especially bamboo cover the land. Particularly In these forests are many iridescent birds to be seen, especially woodpeckers and finches are common, and one can explore countless species. Similarly colored highlights are the many butterflies and moths, who have their homes here. A few large mammals such as elephants, rhinoes and leopards also live here - their populations are now unfortunately limited to designated sites. Only the monkeys make noise in a widespread way through the treetops.

In the medium altitude up to about 1800 m above sea level, the forest is changing, deciduous trees such as oak and chestnut trees are interspersed by Rhododendron, cedars and firs, so that mixed woodland predominates. Here lives the himalayan brown bear, a rare species, whose sighting will delight wildlife enthusiasts. The higher you go, the thinner the forests are, birches complement the trees or are increasingly standing alone in vast grasslands, which are permeated by alpine herbs and flowers. Here live mainly goats and sheep like the himalayan thar and blue sheep (Pseudois nayaur). On this level you can also find the rare Himalayan monal, and very rarely also the now nearly extinct snow leopard.

The magnificent nature of Himachal Pradesh can be experienced in two national parks and 32 sanctuaries to experience the flora and fauna in its original beauty. Almost 70% of the land area is forested, of which about 90% is designated as protected area. Endangered animals like snow leopards, bearded vultures and the rare siberian ibex live here.

Pin-Valley-National Park:
The secluded Pin Valley, a side valley in the former Kingdom of Spiti, is since 1987 a National Park. It comprises several mountain ranges of the Himalayas from 3700 m to 6600 m. Above 5000 m, the National Park is covered with snow all year round. In the sparse vegetation are snow leopards, wolves, mountain goats, foxes, weasels, marmots and some other animals at home.

Great-Himalajan-National Park:
The area, to which the access is to the west, is surrounded on three sides by the Himalayas. Covering an area of 620 km² of snowcapped peaks, glaciers, river valleys, fields of flowers can be found, and dense forests where pine, cedar, oak as well bamboo are growing. To the abundant wildlife, belong among other mountain goats, sheep, wolves, macaques, leopards, brown and black bear, snow leopard and many species of birds.

Those who want to do trekking on holiday are very well cared for in Himachal Pradesh, but also day hikes or slightly longer walks with a comfortable base are marvelously possible here, and allow a view of exotic landscapes and spectacular scenery with white mountain giants. Due to the variety of the landscape, the trekking routes are also ideal to be adapted to personal interests and capabilities.

From the earliest times onwards, the area of the present-day Himachal Pradesh was inhabited by tribes such as the Koilis, Halis, Dagis, Dasa and Kirats. They lived a rural life and had a fairly peaceful coexistence. In the year of 1009 BC then the Turkish commander Mahmud of Ghazni invaded the area, and plundered the temples in the north, many historical documents and works of art were destroyed and deported. In 1773 the Hindu Rajputs took over the rule, and Himachal Pradesh was given the favor of the royal patronage of the Mughals. But the attack of the Maharaja Ranjit Singh ended already in 1804 the rule of the Rajputs.

The Gurkhas, who have been immigrating from Nepal, conquered the area afterwards and caused again great destruction. During the early 19th century British India eventually expanded its influence and annexed after the Gurkha War of 1815-1816 parts of the district Shimla. The district of Kangra was annexed in 1846 after the Anglo-Sikh war by British India. After India's independence in 1947, the present-day Himachal became incorporated into the Punjab (then a province of British India), in 1948 a part became a centrally governed state territory of India. In the years until 1966 additional areas were added.

The remaining Himachal was consisting of princely states, which extended over six mountains until November 1966. Then it has been extended by incorporating mountain towns like Shimla, Kangra, Kullu, Lahaul and Spiti. Himachal Pradesh, with the capital Shimla, was eventually divided into 10 districts and incorporated into the Republic of India on 25 January 1971, as the 18th state.

Himachal Pradesh is one of the most well-developed mountain regions of India. For example, much has been invested in the construction of a road network and the electricity grid is developed almost everywhere. The state has a functioning educational system, which secures the future. The agricultural yields cover almost the whole domestic use. The gardens of Himachal Pradesh are known beyond the country's borders, and the forest land came under protection and was further enlarged in recent years, mainly due to the efforts of the population. The region is a role model for all the other Indian mountain regions.

Throughout the year, diverse festivities with local character take place in the districts. Kulu for example is famous for its Dussehra festival wich is held each spring. The images of the Mountain Gods are brought down from the villages into the city, accompanied by parades, dance and music - a colorful and joyous festival that will also delight visitors.