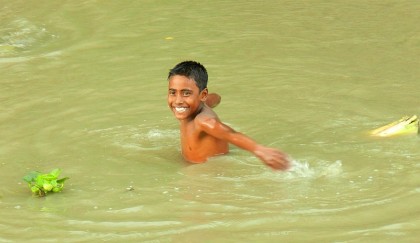 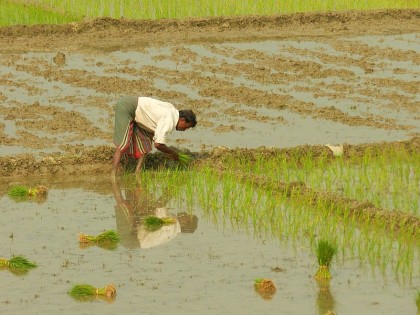 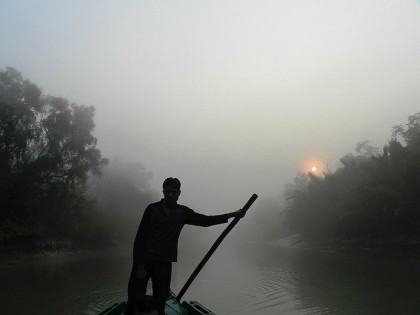 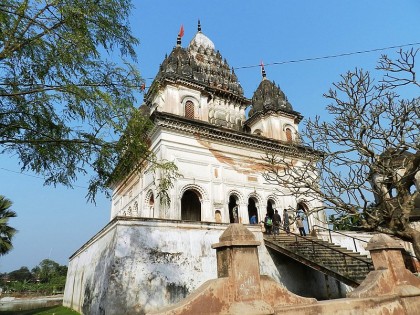 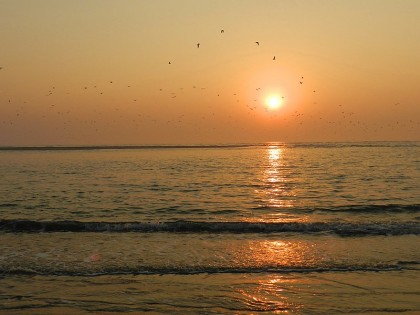 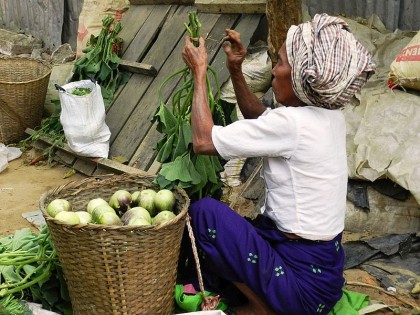 The largest coherent mangrove forest on earth, the bustling metropolis of Dhaka, deep green tea plantations, and mountain regions populated by various small tribes are awaiting visitors of Bangladesh, the land of the Bangla speaking. The two long streams Ganges and Brahmaputra, which are together about 5,700 km, coming in a wide arc from east and west respectively, cross the borders to Bangladesh from the Himalayas, and unite here, bringing the water which is a blessing and a curse for the country. Bangladesh is, especially in the monsoon season in June, July and August, always the victim of devastating floods, which has made it difficult to build a touristically usable infrastructure in recent decades. While other regions of Asia now check in billions of package tourists every year, is a stranger - a "Bideshi" - in Bangladesh still noteworthy, and is welcomed by the locals curiously and friendly.

If you are planning your trip to the touristically new territory of Bangladesh with a competent partner like us at your side, nothing stands in the way of the experience of the genuine Asian way of life, untouched nature and fascinating wildlife. Lovers of fine teas draw from a cornucopia here. The unique architecture of the ancient Hindu temples and ornate mosques, and the mystical ruins of Buddhist monasteries will produce the same awed silence in you than the majestic roots of the mangroves, where one glides slowly in the delta of the Ganges and the Brahmaputra.

In this Garden of Eden, you can actually just hear the beautiful concert of cicadas, and the conversations of colorful birdlife. In this pristine environment, you will almost automaticaly reach a stage of peace and serenity, and understand why in this region the peace of Buddhism is looking back on such a long tradition. The bustling, colorful life in the capital Dhaka finally gives the opposite, the lively and challenging, short the modern aspect of Bangladesh.

Particularly for a trip to Bangladesh, it is immensely important to have competent support; from complying with the extensive entry regulations, to information about necessary vaccinations, to  ensuring the transfers and sightseeing within the country, we are at your side. Thanks to our personal experience, we build the bridge to Bangladesh, to this small country in Asia, which is getting the much needed financial support through tourism, and in which all chances are still open, to establish tourism in harmony with nature.

In Bangladesh one experiences during our winter from October to March a mild and pleasant climate. The special charm of the high monsoon in June and August may appeal to adventurous travelers.

Bangladesh, having an average population density of more than 1,000 people per square kilometer, is the most densely populated country in the world. In an area, which is about twice the size of Bavaria,  live some 158 million people! About a quarter of the population lives in cities, only the Chittagong Mountains and the nearly uninhabited Sundarbans are thinly populated. Unlike other South Asian countries, Bangladesh is ethnically very uniform. Approximately 98% of the population are of Bengali origin, one of the few minorities include the Bihari, the Chakma and the Mogh peoples; the latter are of Mongolian origin and live in the Chittagong hills.

The cultural character of Bangladesh, due to its past, in which, among other, Afghans, Ethiopians, Arabs, Turks, conquerors from North Asia and colonizers from Europe played their part, is evident throughout the country, and is also reflected in the predominantly Sunnite folk Islam, who is the state religion too, and has elements of animism, Buddhism and Hinduism incorporated in it. Approximately 12% of Bangladeshis are Hindus. Into Buddhism (mainly Theravada / Hinayana), Christianity and animist religions each fall less than 1% of the believers.

The Bengalis love poems, music, dance and theater. Their kind of classical music and dance is completely different from the European. In all major cities there are theaters, where Folk dramas, but also western dramas, like "Romeo and Juliet" will be played. The local people's theatre is called "Sattra", and is organized regularly in winter in the villages.

Generally, the food in Bangladesh resembles that of India, Pakistan, Sri Lanka and Nepal - a typical dish consists of rice, river or sea fish and vegetables, and is usually very spicy. For breakfast there is homemade, pan- fried bread (Roti) or stuffed flatbread (Paratha). Among the peasants and workers, the traditional Panta is widespread: rice in water with bell pepper, salt, onions, potatoes or eggs. Other typical dishes are depending on the season: In the rainy season, one likes to eat "Khichuri" with fish or eggs, in winter 'Pitha' (an often sweet pastry made from rice flour), "Vapa" or "Patisapta".

Other local specialties are the Kebab, which is popular around the world, biryani, grilled meat with special drinks (Borhani) and sweets made of milk, rice and / or white flour. Homemade, fresh lime juice is a popular refreshment beverage. Alcoholic beverages are only available in licensed bars and restaurants.
In Bangladesh, there is a wide selection of fresh fruits, including mangoes, lychees, jackfruit (Kathal), guava, banana, sugar apple (Ata), dates, star fruit and water fruits (Panifal).

The population of Bangladesh is mainly engaged in agriculture, and it must pursue it extensively, to provide a reasonably comprehensive nutrition of more and more people. Nevertheless, the river delta in the south of Bangladesh, which is formed by the Brahmaputra, the Ganges and the Meghna, one of the regions of our planet which is still unspoiled by modern civilization. 60% of the Sundarbans (beng. Beautiful Forest), a mangrove forest of 10,000 square kilometers, spreads out within this delta, and is home to many endangered animal and plant species. Only here will the plant friend find the Sundari tree, enjoy the flowers of man-high poinsettias, water hyacinths, jasmine, water lily, rose, hibiscus, bougainvillea, magnolia and wild orchids.

An admirer of large predatory cats does in fact have the chance to a sighting of Bengal tigers, a leopard or a fishing cat in the wild. Fortunately, much of this unique ecosystem is placed under state protection since 1977, and since 1997 the title of UNESCO World Heritage confirms the protection. More remarkable mammals living here are elephants, Asiatic black bears, sloth bears, clouded leopards, leopard cats, rhesus monkeys, several species of deer, wild boars, jackals, gibbons, loris, banteng, gaurs, Ganges dolphins and dugongs.

The biodiversity of Bangladesh is complemented by various interesting species of fish, reptiles and butterflies. The mangrove forest in Bangladesh offers travelers today the opportunity to immerse themselves in a completely natural soundscape. In the area around Syleth are extensive wintering areas for migratory birds, where such an outstanding nature experience is also possible.

Sundarban - mangrove forest reserve
The Sundarbans in southern Bangladesh belong to the largest coherent mangrove forest in the world. The 6,000 square kilometers, rich ecosystem is home to many endangered animal species and plants. It also protects the populace in the interior against the increasingly recurrent tropical storms. The area on the border with India is the last major habitat of the Royal Bengal tigers, a bit over 300 of these animals live here, about the same amount as lives on the Indian side.

The Lawachara National Park
In the northeast of the country, the territory of the Lawachara National Park comprising 12.5 km² is located, amid the semi-evergreen "West Bhanugach Forest". Here thrive around 170 different species of plants, it is the homeland for about 290 different species of animals - including the population of Western Hooklock Gibbons, comprising of only 62 specimens.

Satchari National Park
24.3 km² of protection area in the northeast of the country, for more than 200 different species of trees (including sal tree Shorearobusta, teak Tectonagrandis, eucalyptus, rubber trees and countless species of bamboo) and the animal species inhabiting it such as the rare phayre leaf monkey Trachypithecusphayrei , other mammals and especially birds like the red head trogon Harpacteserythrocephalus and the kizuki woodpecker Dendrocoposkizuki.

In the far south, on the coast, the Teknaf region is located, in which the unique ecosystem of the sandy beaches, criss-crossed by rivers is protected, with their individual flora and fauna, and -  in the area of mangrove forests- 161 different species of fish.

The region which is today's Bangladesh is mentioned in the historic scriptures since 1000 BC. The majority of the population was first of Buddhist faith, from the 10th century onwards then predominated Hinduistic currents. In the twelfth century, the dominant Buddhist and Hindu dynasties were replaced by Muslim conquerors and Sufism (a current of Islam) gained the upper hand. In 1576, Bengal was incorporated as a province in the Mughal empire, and also most of the Bengalese converted to Islam, which to date plays an important role in politics and society and  as a state religion.

Portuguese traders and missionaries reached Bengal in the early 16th century, Dutch and French followed. In 1650 landed the first British, and built trading posts and factories for the East India Company. About one hundred years later, the Company received the tax sovereignty of some provinces of the Mughal Empire. In 1858 the British crown extended its influence from Bengal in the east to the Indus in the west. Thus the history of Bangladesh is permeated by Dravidian, Indo-Aryan, Persian, Turkish and European influences, the past of

Bangladesh is reflected in archaeological relics, historic buildings and monuments. Examples of Buddhist, Hindu and Islamic architecture can be found across the country, as well as in the commercial centers of Dhaka, Chittagong and Sylhet. Due to the fact, that the majority of the population is of Muslim faith, Bangladesh was split in 1947 from India and became part of Pakistan, under the name East Pakistan. Over the next 26 years, Pakistan was drawn by political and economic instability. For East Pakistan, at a disadvantage not only economically by the separation from the Indian part of Bengal, began a period of dependency and oppression. The relationship between East and West Pakistan escalated dramatically after the second war with India over Kashmir in 1965.

In 1971, finally East Pakistan became independent under the name of Bangladesh, as a result of the Bangladesh war. The young state had since been going through many famines, natural disasters, poverty, political turmoil and military coups. Since democracy was reintroduced in 1991, a relative stability prevails, and an economic progress can be observed.

Bangladesh is one of the developing countries, however, it recorded in recent years an economic growth of 5-6% annually. Approximately 56% of the population work in agriculture, particularly rice, jute, tea and rapeseed are cultivated; mangoes, lychees, sugar cane and tobacco are further agricultural products. Although more than half of all Bangladeshi nationals are farmers, only 23% of the gross domestic product originate from agriculture, more than 50% from the service sector and about 25% from the manufacturing sector - especially from the clothing industry.

Bangladesh is the second largest textile producer in the world, 90% of the approximately 4 million workers here are women. Bangladesh's main exports is clothing at about 75%, next is frozen seafood such as crabs and shrimp, jute and jute products, leather goods, ceramics and tea. Mining is undertaken almost exclusively in the northeast of the country, and only for domestic use, mainly gas and coal.

Even though the state religion is Islam, freedom of religious belief prevails in Bangladesh, and there are multiple religious festivals celebrated throughout the year. The most important holidays are the two biggest festivals of Islam: Eid ul-Fitr, a three-day feast at the end of Ramadan, and Eid al-Adha, which commemorates Abraham's willingness to sacrifice his son. Also the large Hindu, Buddhist and Christian festivals are celebrated. The Bengali New Year takes place on 14 April. This includes cheerful music and dance performances, carnival-like street shows and colorful New Year markets (Melas).