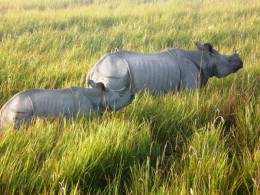 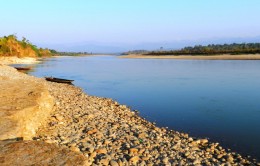 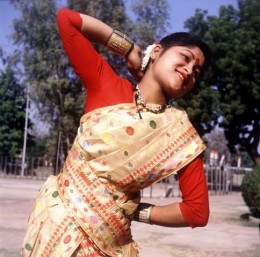 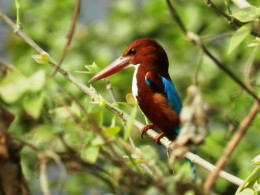 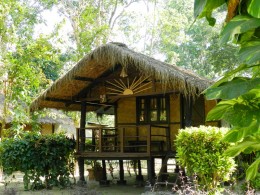 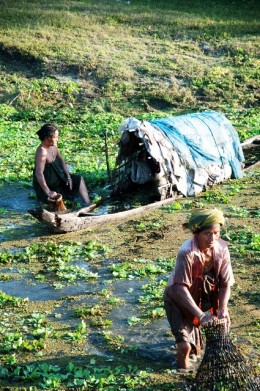 In the Realm of the Mighty Brahmaputra

The nearly 80,000 km² of area of the state of Assam are located in the secluded northeastern part of India, framed by the six sister states of West Bengal, Arunachal Pradesh, Meghalaya, Nagaland, Manipur, Tripura and Mizoram; Assam also has borders with Bhutan and Bangladesh. The appearance of the emerald green stretch of land is mainly characterized by a mighty river: the Brahmaputra, whose valley winds over a length of 1000 and a width of up to 100 kilometers through the foothills of the Himalayas. In the monsoon season this mighty stream changes its course again and again, and sets wide parts of the country under water. This initially seemingly destructive, but above all nevertheless life-giving power of the river manifests itself in vast forests with exotic flora and fauna, the green tea gardens and fertile rice fields.

The friendly population of Assam settles mainly  in the colorful, picturesque villages, which are embedded in the hill, but also in some bustling cities which allow the comfort of modern life. Traditionally, the locals predominantly are of Hindu faith, so that several temples, for example on the river island of Majuli and in the city of Guwahati invite for sightseeing. The river island of Majuli, one of the largest river islands in the world, is home to the Assamese Vaishnava culture and an extremely interesting sightseeing destination. But also the religion of Islam is ranging already in second place in the number of faithful - rather untypical for India - because of immigrants from Bangladesh, the religion has left its architectural mark and enriches the image of the towns.

As almost everywhere in the Indian north and northeast, it is above all nature that makes a holiday in Assam to something very special. The Kaziranga National Park, which was  made a UNESCO World Heritage Site in 1985, is among others, home to the rare Indian rhinoceros, the Indian elephant, Bengal tigers, wild water buffalo and the rare swamp deer. Other large predators such as the sloth bear, the Asiatic wild dog or the Indian leopard lend a safari in this park a delightful faint thrill, while for example the muntjac and barasingha seduce to make a silent pause, so as not to disturb the shy animals. The Kaziranga National Park, as well as the numerous other wildlife parks and nature reserves delight also the ornithologists, because the birds are as well represented as the mammals.

The enthusiasts of fine tea taste can find here, in the largest contiguous tea fields in the world, the opportunity to accompany the tea plant from the first growing green shoots up to the hand-picked, dried leaf and to receive an introduction into the traditional ceremonial preparation.

Whether comfortable river cruise, safari in the powerful Jeep or the uplifting ride on a broad elephant back off the usual tourist routes - a trip to Assam offers you a wealth of unforgettable impressions in a country, that shows you the boundless power of creation of the monsoon like nowhere else in the world.

Ideal from November to April, optionally also from October to May. The stormy monsoon from June to September is not suitable for travel. Due to flooding by the stream Brahmaputra, the Kaziranga National Park is closed from May to early November.

Among the first humans who settled in Assam, were probably members of the Tibetan Bodo peoples, which reached the banks of the Brahmaputra across the Himalayas. Later, various tribal peoples from southern China and Southeast Asia settled down as the Naga, Mizo, Kachari, Khasi and some others in the mountainous regions south and east of the river. Only a relatively short time ago also Hindus immigrated, which are the now dominant people of the Assamese. Many of today's Hindu pilgrim places were, as shown by legends and archaeological evidence, built on early Buddhist power centres of indigenous peoples. One such example is the Kamakhya Hindu temple in Guwahati, under which a much older Buddhist temple has been found. Since the period of the British colonial power, the rights of the autarkic tribal peoples have been protected, even today is Assam a multiethnic state with about 16 indigenous tribes.

The predominantly illegal immigration of refugees from Bangladesh is a growing problem and creates, in addition to the increase in the already strong population growth, again and again for racist attacks. The religious affiliation of the population of Assam depends quite precisely on the affiliation to the ethnic groups. Thus, in Assam about 50% belong to Hinduism, with an emphasis on Durga, Shiva and Ganesh (Vainshaba). On the river island of Majuli is the seat of the Vaishnava school, which was founded in the 15th century by the great reformer and saint Shankardeva. The temples are still active today and also offer travelers a deep insight into the culture of Hinduism.

Further religious groups in Assam are the Muslims with about 30% of the faithful, which are found mainly among immigrants from Bangladesh and Bengal, Sikhs, Christians and especially in the tribal communities - animists with their ancestor worship make up the group of the minority religions. In a few tribes, Buddhism is also still the dominant religion, such as in the Tai-Phake villages of Assam, whose inhabitants belong to the Hinayana Buddhism, and their history leads to Thailand. The Tai-Phake speak a dialect which is closely related to Thai. People follow traditional Thai traditions and dress accordingly. Here is also one of the oldest active Buddhist temples of Assam, the monastery Namphake from the year 1850.

The cuisine of Assam is characterized by a mix of local and foreign influences with regional specialties. Characteristic are simple, fresh and well-seasoned dishes. Fermented ingredients are widely used, which gives the food a very unique, characteristic taste. Assamese eat rather mild, far less spicy than elsewhere in India, which certainly pleases the European palate. The staple food is rice, which is served in fish, lentils and meat curry dishes, together with herbs and vegetables. The curries are usually flavored with ginger, garlic, cardamom, cinnamon, onions and sometimes lime. During the Hindu celebrations, sweets from rice paste are popular. A specialty that you should definitely try during your holiday in Assam, is Pitha: A very thin crepe filled with sweet coconut paste or sweetened paste of black sesame.

Assam is one of the richest biodiversity zones of the world. The country has numerous tropical rainforests, unique wetlands, bamboo groves and vast grasslands. Many of these areas are protected. In the monsoon season, the streams of the Brahmaputra and the Barak (that’s what the headwaters of the great stream of Meghna are called) set much of the country under water and leave behind energy- dense sediments, that enrich the soil and make it extremely fertile. This is not only good for agriculture, even the original flora is exceptionally rich and diverse due to this, and home to an exceptionnal number of different species of animals. The pristine wildness of the nature in Assam is a delightful contrast to the cultivated tea plantations, and allows for informative excursions and varied holidays.

The National Parks of Kaziranga and Manas are on the list of the UNESCO world natural heritage. They include, among other, the habitat of the rare Indian rhinoceros and of the Bengal tiger. The Namdhapa National Park is the only place where all four species of wild cats of India live.

Kaziranga-National Park
The national park features within its 430 sq km core area a diverse mosaic of forest, grasslands and wetlands. Famous is the National Park for the Asian one- horned rhinoceros, which finds a habitat here.

Manas-National Park
The 500 km ² large National Park has its own tiger reserve and is a part of a total of more than 5000 km² of protection area. The Manas National Park is a paradise for ornithologists, and fishing is also possible.

Nameri-National Park
Perhaps the most beautiful National Park in Assam ever. It is famous among others for its large elephant population. Also worthwhile is a boat trip on the river Jia Bhoroli.

Orang-National Park
Here one  can marvel at one-horned rhinoceroses, elephants, leopards, deer, tigers and many water birds. The park is also famous for its migratory birds from all around the world.

The landscapes of Assam invite you to take long hikes through the various vegetation zones, and allow for manifold wildlife viewing. The rather small differences in altitude allow the trekking even for less enduringly trained vacationers.

After the settlement of the present-day Assam region by various ethnic groups originating from Southeast Asia, the area was under the rule of the Buddhist Ahom dynasty from 1228 onwards for 600 years, the capital at that time was Sibsagar. The Ahom family belonged to the Burmese Shan tribe. They managed to repel several invasions of the Mughals and the Sultans of Bengal, and shielded their kingdom more and more from external influences, what led to the development of a very distinctive culture. Only king Rudra Singha is said to have re-opened a trade route between Tibet and Assam at the beginning of the 18th century. He also encouraged bengalese musicians to reside at his court.

It came to a mixing of the Ahom family with other Bengalese, and to an invasion of Burmese troops into the kingdom, until the British 1826 officially took over in Assam. They governed the territory until 1947. Until the reorganization of India in the course of independence, Assam comprised of the entire region of Northeast India, the modern Assam consists after various divisions only of a fraction of this area. The most recent state to split off was Meghalaya in 1972, which also took over the then current capital Shillong; the new capital of Assam was Dispur. Since 1979, the United Liberation Front of Asom (ULFA) is fighting with guerrilla techniques for the independence of the state from the Indian Republic, the separatists are fought militarily by the Government of India.

Approximately 80% of the residents of Assam work in agriculture, and produce among others the world-famous, rich and tart tea, which provides the bulk of the volume of exports for the state. In addition, rice, sugarcane, jute, oil seeds and fruits are grown and also the assamese silk - in particular the special type of silk "muga", the "golden silk" - is coveted worldwide. Also bamboo and rattan products in the form of furniture and decorations are of economic importance. However, the second major pillar of the assamese economy is the production of crude oil and natural gas, and related further industrial processing, such as oil refineries. Even coal, limestone and granite are mined and there are cement productions. The population of Assam mainly lives in rather poor conditions in the countryside, the literacy rate is nonetheless around 75%, slightly above the all-India average.

In Assam the festivals and holidays of the Hindu calendar are the most important, because most of the locals are of Hindu faith. What festivals exactly fall in your travel window, we would prefer to discuss with you personally - because the festivals are based on various lunar calendars, and besides they are weighted differently from one temple to another, it is virtually impossible to create a general overview. Of course, the well-known Muslim holidays have quite a big importance. As statutory holidays in Assam, which are independent from the religions, are Republic Day on January 26, Independence Day on August 15, as well as the birthday of Mahatma Gandhi on October 2.