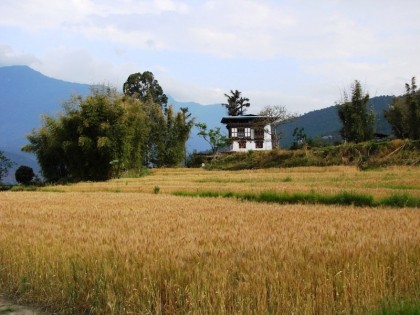 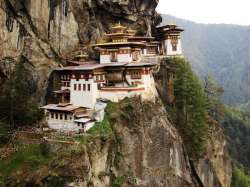 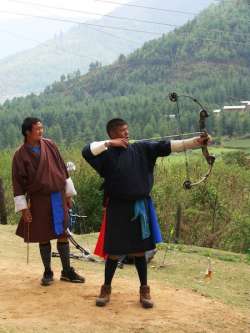 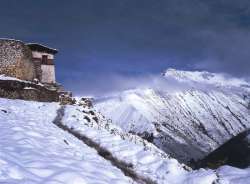 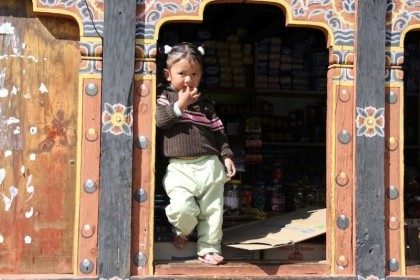 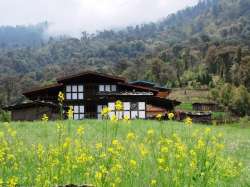 Bhutan – the Land of the Thunder Dragon

A country with an area that is roughly equivalent to the size of Switzerland, however in which three distinctly different climatic zones are united, and which has been little touched by tourism, this is the Kingdom of Bhutan. Located in the northeastern Himalayas, it has borders and prehistoric links to Tibet (China) and India. Only very lately has the monarchically ruled Bhutan, whose national language name "DrukYul" might be translated as "Land of the Thunder Dragon", opened to the achievements of modernity, and introduced television only in 1999.

Only in the year 2004, mobile phones have gained entrance into Bhutan. This has led to a unique preservation of cultural peculiarities, the religious traditions of the Vajrayana and of the Mahayana Buddhism, which one can experience in the day to day life, but of exceptional purity. Particularly the mighty monastery fortresses, the Dzongs, which are found everywhere in the country, are still hoards of religious seclusion. The preservation of cultural values, and the traditional way of life happens quite naturally to the present day, in a natural unity with the newer trends, which, among other things, also results in a highly sustainable handling of resources and the preservation of the scenic beauty, and the diversity of the flora and fauna.

More than two thirds of the country is covered by forest, more than a quarter of the land area is under protection, in the near future, it is intended that the entire agriculture and forestry produces ecologically, and power generation is carried out exclusively on advanced hydroelectric power plants - a condition, which in the Western industrialized nations is defined quite as a target for future. In the vast forest areas of the different climate zones not only herds of wild elephants and large predators like Bengal tiger, leopard, snow leopard, clouded leopard and various bears and their prey can be found, the plant diversity is just as immense.

Our personal, direct contacts in Bhutan enable you unforgettable encounters with the people here, enjoyable natural and mountain walks in the the most diverse regions of this fascinating and extraordinary country, and you can also witness their colorful and boisterous festivities. Whether your bridge to Bhutan is intended to rest on a cultural foundation, and you particularly want to experience the daily lives of tribal people, or if you want to build a bridge to immerse yourself during a single stay in a typically subtropical, temperate and alpine flora and fauna, in Bhutan you will collect unique experiences and spend an unforgettable holiday.

Ideal for a holiday in Bhutan are the months of October and November, as well as March and April. The winter months from December to February are rather inhospitable due to the weather conditions, the stormy monsoon from June to September is also not good for traveling. The weather in the mountains in autumn from October until the beginning of December is ideal for a trekking holiday in Bhutan, flower lovers will enjoy the spring, when the country awakens colorfully, and sowing takes place in the fields - May can partly already be under the influence of the monsoon. Those interested in culture will be lured particularly by the months of April, September and October, because now a large part of the local festivals are taking place.

As is typical in this region, is the Bhutanese population made up of different ethnic groups, who have immigrated in the earlier centuries from the surrounding regions. In Bhutan, the ratio is quite balanced, about one-third of the population belongs to the people of the Ngalongs, whose main settlement area is found in the western highlands. From their ranks originate the reigning Bhutanese monarchs, and their mother tongue is the official language, Dzongkha. Just like the Sarchops, the second large tribe, they practice the Mahayana Buddhism, due to their Tibetan origin.

The third major population group constitute the Lhotsampas, who are traditionally Hindus and who are originating from Nepal, and have settled primarily in the southern lowlands. The coexistence of these three peoples is not always easy in Bhutan, because the Hindu, Nepalese part of the population is partly exposed to marked repressions on the part of the royal family - partly out of fear of democratic aspirations, partly from the not unjustified fear of displacement of the indigenous people through the Nepalese, as it has been the case in other parts of India today.

The food of the Bhutanese population is considered extremely spicy for the European palate, because here, chillies are not only used for seasoning, but also eaten raw and cooked, as a vegetable and salad. Otherwise, the staple food is rice, one white, and one nutty tasting, reddish variety are widely used. For the national dish "Ema datshi" is required, in addition to various chillies, a little tomato and garlic, some yak cheese, with which a stew is cooked, that is served with rice. In the intermediate altitudes, wheat and other grains are cultivated and processed, and Yaks living at higher altitudes provide meat and dairy products.

A special treat is fried yak skin, which one should definitely sample on a journey to Bhutan. It is important, as everywhere else in Asia, not to eat uncooked or unpeeled fruit or vegetables, because against the bacteria, which are causing diarrhea among Europeans, also the sharpness of chillies is powerless. Additionally, a fairly wide range of alcoholic beverages are available in Bhutan: beer, whiskey, gin and rum, and above all, arak, a rice liquor, are produced here and are very inexpensive.

The flora and fauna in Bhutan achieves a extraordinary biodiversity in accordance with the climatic latitude. In the subtropical forests in the south, not only elephants and tigers, but also gold langurs Trachypithecusgeei and other, partly rare species of monkeys live in the forest canopy. Moreover noteworthy is the variety of amphibians and reptiles (eg the himalayan salamander Tylotriton, the hole otter Trimeresurus, the king cobra and the monitor lizards, which are in no way inferior to those  around 580 different species of birds (eg hornbills Bucerotidae and pallas-osprey Haliaetusleuryphus.)
The higher elevations of Bhutan are also populated with species of animals, which are typical for this climatic zone, but which are rare too. Yaks and gaurs, various species of deer and different sheep and goat species share the grazing grounds, and nibble on the leaves of the here prevailing low bush vegetation.

The Jigme-Dorji- National Park, located in the northwest of Bhutan, extends with its more than 4300square kilometers area from an altitude of 1400 m above NHN up to 7000 m above NHN, making it home to snow leopards, small pandas, takines (budorcas) and blue sheep - an unbelievable range. The second largest National Park, Jigme Singye-Wangchuck, protects the rare musk deer, the black bear and the small panda in its 1,300 km² of coniferous and deciduous woodland in the temperate zone. Ornithology enthusiasts can look forward to sightings of the dazzling satyrtragopans Tragopansatyra, a rare type of pheasant, which may be encountered here, in addition to many more birds.

Also vultures and cranes in various sub-species like to spend the winter here. Other national parks are the Royal Manas National Park in the tropical-subtropical zone of the South, and the Thrumshingla National Park, also located in the temperate climate zone, and home to the red panda. In combination with our travel module Assam, we recommend to all those who areparticularly interested in the local wildlife, to visit the Kaziranga National Park as well, which is one of the most important conservation areas of the Bengal tiger, the Asian elephant, the wild water buffalo and the barasingha deer.

Bhutan is a diverse holiday destination, whose mountain scenery invites to extended trekking tours. Mountain peaks as the Chomolhari (7110 m), the GankarPuensum (approximately 7570 m), the Zanghopho Kang (7085 m) and of course the KhulaKangri with 7538 m are calling to conquest, to a round trip or to admiration from a greater distance - depending on the requirements, physical fitness and mountaineering experience. The panoramas are manifold and very impressive at all altitudes, and who prefers to discover the country the comfortable way can choose from our diverse group and individual travel program.

The first inhabitants into the region of present-day Bhutan were presumably the Thepu people, whose history, unfortunately, has no written record, but which practiced a Hindu belief. In the 9th century AD. came the region due to Tibetan immigrants under Buddhist domination, and the Tibetan Lamaism asserted itself as the state religion, and united the mixed peoples and cultures.  In that time many large monasteries emerged, which took over a great part of the administrative tasks of the country. An association of many little principalities happened for the first time in 1616, and the State would receive its final name of "Druk Yul" - Bhutan.

Again and again, the state was subject to attacks in the following centuries: Tibetan-Mongolian troops attempted to take power in the early 18th century, in the late 18th century the British East India Company began their attempts to incorporate the country into their great empire. Since 1907, there is a succession of today's monarchs, who since then enforce a strict and sometimes controversial policy in their kingdom.  Only in the the early 21st century, a slow opening of the country to Western nations became apparent, and a democratization process began, which continues until this day.

Bhutan is one of the poorer countries around the globe when you look at the gross domestic product, but it is the only country in the world, which has an index of gross national happiness.  Economic growth is not a state policy objective, but solely nutrition, security and satisfaction of the population, the preservation of cultural values and the protection of the environment. 90% of the Bhutanese population lives from agriculture and animal husbandry: corn, rice, wheat, barley, buckwheat, millet and fruits are cultivated.

Among the export goods of Bhutan counts above all electricity, generated in the west of the country in hydroelectric power plants, also cement, wood products, alcoholic beverages and fruit add to the foreign trade income. Another industry is tourism, which experiences a slight growth in recent years, and because in its expansion, also the principle of sustainability is paramount.

In Bhutan, especially the Hindu and Buddhist festivals are celebrated, which are traditionally scheduled according to the lunar cycle, and other astrological observations. These are distributed throughout the year, usually in the form of masked dances, which last several days. The "Tsechus", which are  heldIn the monasteries (Dzongs), in honor of the great Gurus, especially Guru Rinpoche Padmasmbhava, with their colorful rituals, are an enriching experience of each Bhutan journey – it will be our pleasure to advise you about the in your travel window concretely occurring festivals!

Also the grand Hindu Dashahra Festival (engl. Dussehra) is the culmination of a ten-day festival, which definitely is worth a visit. The right selection of the festivals scheduled in your trip according to your interest is very important to us - because regionally influenced, the rituals of the festivals differ sometimes significantly one from another. For culturally especially interested travellers, it is also important to visit a festival in a monastery, which is not too heavily frequented by tourists.