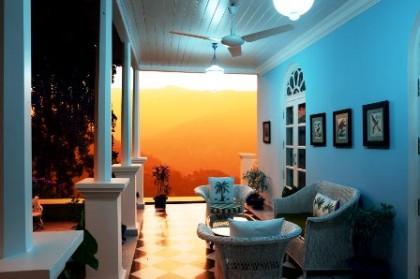 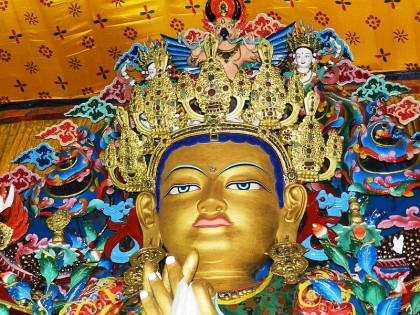 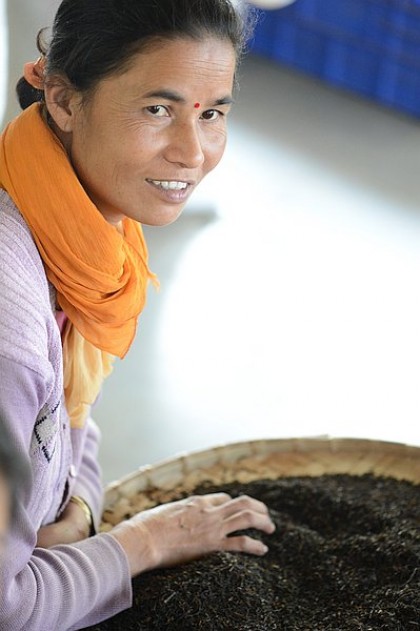 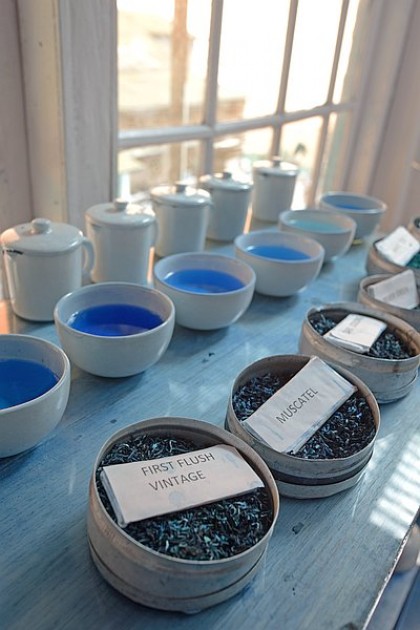 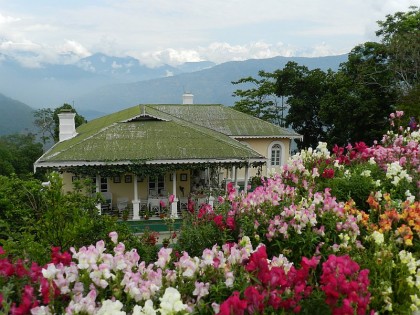 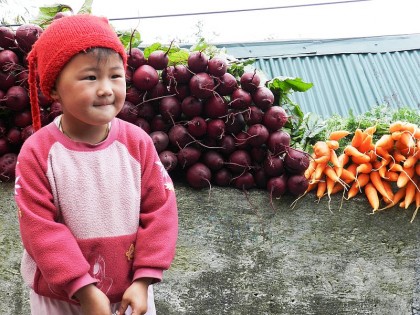 In addition to the city of Darjeeling, also the surrounding, mountainous district in the north of the Indian state of West Bengal bears this name - and of course the in the meantime world famous tea. Darjeeling borders in the north to the district of Sikkim, and stretches south until the town of Shiliguri, the population and the culture come mainly from the nearby Nepal. Among the more important cities of the district of Darjeeling counts Darjeeling itself, Kalimpong and Kurseong, the largest city is Siliguri.

The name Darjeeling is immediately associated with the "champagne" among the tea types. The place located on approximately 2000 m altitude, which originally belonged to the kingdom of Sikkim, was once the summer residence of the British colonialists, which relocated, their administrative headquarters from Kolkata (English: Calcutta) into the airy, cool hills in the north of Bengal in the sweltering summer months, and there also started with the cultivation of tea.

From this period dates also the narrow gauge railway, which was built in 1880, and which torments itself upward through the forests, tea gardens and the lush green hills with the same, old steam locomotives and wagons to this day. The train, affectionately called "Toy Train", has practically not been changed since the time of the British Empire, which makes it a nostalgic highlight for railway fans from around the world.
From the mountain ranges around Darjeeling, one does not only have a wonderful view of the sprawling tea plantations, but also on some of the seven- and eight-thousanders of the Himalayas. Especially from the nearby Tiger Hill, one can enjoy a fantastic panoramic view of the Kangchendzönga massif in north Sikkim until Mount Everest, Lhotse and Makalu farther to the west in Nepal.

In the picturesque village of Kalimpong, which is nestled on a hillside on 1250 meters, orchids, cacti and other ornamental plants are grown in many small nurseries, for distribution in the neighboring cities of northern India, and for the export. The town, which belongs like Darjeeling to the Indian West Bengal today, was until the beginning of the 19th century part of the Himalayan Kingdom of Bhutan. About this time still reminds the Bhutanese monastery Thongsa Gompa, which however is not obtained in its original state since the political Gurkha uprising in the second half of the last century.

Situated a little further east of Kalimpong is a region called Dooars, which was once with its mountain passes the door (hence the name) to Bhutan. In addition to many tea gardens, which appeared in the lowlands, one can  marvel at the original flora and fauna of the Himalayan foothills in some nature reserves, which in addition to a paradisical bird life also includes the now rare leopards, rhinoceros and elephants. The Dooars are also famous for the rich culture, craftsmanship and the local markets of their indigenous tribal residents.

The district of Darjeeling is suitable for a trekking holiday even for participants who don‘t like to face the physical challenges of the great height thoughtlessly; the routes are between 2000-3600 m and for all overnight stays there are fixed accommodations. For a particularly pleasurable immersion in the world of tea and the mountain scenery of the Himalayas, you too should select the bridge to Darjeeling, because from an extremely comfortable accommodation here, there are many possibilities for day trips.

Darjeeling can be visited almost all year round, because of the pleasant daytime temperatures between 8 ° C and 19 ° C, especially for trekking, the climate is ideal – only between May and September, the area gets a lot of precipitation during the summer monsoon. In the spring, from about March to May, it is an all wonderful experience to observe the tea harvest in Darjeeling, to discover the multicolored floral splendor of the Himalayas and the beautiful orchid bloom. Also the blossoming of the dense rhododendron and magnolia forests with their heavy, lush sweet odors is now a particularly recommendable event. The clear air after the monsoon provides for an excellent distant view of the white mountain peaks in October to December, and is therefore also an excellent travel time for trekking tourists - although of course one has to adapt the equipment accordingly, to the cooler temperatures. This is particularly true for the winter months of January and February but which, thanks to the pristine blanket of snow already from about 3000 m above sea level, also have their very own magic.

The ethnic composition in Darjeeling is multifaceted: Here Bengals are settled and Gorkha, originating from what is now Nepal, along with some indigenous native tribal communities such as the Bothia and Lepcha. Even though the Bothia and the Lepcha are among the first settlers in the region of today's Darjeeling, so the Gorkha people represent by now the majority of the population, which have been resettled here less than 200 years ago by the British, initially as soldiers, and later also for the support of the tea cultivation here.

Accordingly is the distribution of religious beliefs: a large part of the population practices Hinduism (Bengalis and Gorkha), especially among the Bengalis there are also some Muslims, while the indigenous peoples of the Bothia and Lepcha are traditionally Buddhists, whose religious practices are influenced to a certain extent by the early animist shamanism. The coexistence of nations in Darjeeling is not always easy, because the Gorkha are striving since years for an autonomous territory, "Gorkhaland", and refer to the actually legally not uncontroversial annexation of the territory by the young Republic of India. Were there in the past, quite violent outrages in this regard, the efforts are taking place today on a political level.

In Darjeeling, a vegetarian diet is quite widespread, which can be attributed in part to the beliefs of Hinduism. However, there are  - especially in the restaurant scene - also strong Tibetan / Chinese influences, and the "momos", little dumplings which are stuffed with meat, absolutely belong to the traditional dishes of the region. Otherwise, rice is the most common side dish or it is made a main course in the preparation as a classic curry. Also "dhal", the stew made from lentils and / or other pulses is eaten frequently and with much pleasure by the population. During a vacation in Darjeeling you should in any case pay attention, not to eat uncooked and / or unpeeled fruits and vegetables, because the European gastrointestinal tract is not used to the here common bacteria. Even a brief enquiry or an indication of the desired degree of spiciness of the food is not wrong, although the forms of preparation prevailing here are absolutely perceived as tasty, also by Europeans.

The mountain biosphere of Darjeeling is situated in a temperate zone of the subtropical continental climate, of which the flora and fauna is beautiful and diverse. Mixed forests of rhododendron, pines, magnolias, chestnut and oak trees, always with dense undergrowth of bamboo and ferns, cover the mountainsides and create during their blossom in spring a beautiful array of colors, dotted with the beauty of orchids in bloom. A wide variety of birds, insects, reptiles and of course mammals such monkeys, elephants and even rhinoceros and leopards live here. The red panda and the black bear inhabit the jungle too, but are - like many of the larger mammals - now mainly to be found in the corresponding nature reserves.

The State of West Bengal protects its original animal and plant world in five national parks km² with a total area of nearly 2000 km². Especially the Sunderban National Park houses in its unique habitat of mangrove forest in the river delta many of the extremely rare big hunters like the Royal tiger, the Bengal tiger Panthera tigris tigris, fish cats Prionailurus viverrinus and leopard Panthera pardus fusca. But also the Neora Valley National Park is home to many of these predators and also a bird paradise for ornithologists, and a very attractive destination to observe for example the beautiful satyr tragopan Tragopan satyra, the red barbet or the Darjeeling woodpecker Dendrocopos darjellensis.

A Darjeeling vacation offers a very special range of creative possibilities. Luxurious recreational days in first class hotels, and days of enjoyment of fresh tea (with accommodation in a luxurious Tea Estate for example) can be complemented with basic hiking tours in the surrounding area, to get to know the nature and the culture of the district, and to experience it first hand. In order to completely immerse oneself into the landscape and life, we offer further, manifold possibilities, such as an accommodation in a homestay, and also various longer, tested trekking tours.

The Lepchas are the tribe who settled first of all in the area of today's Darjeeling, although due to the cultural characteristics of these indigenous people, historical documents don’t exist. Right at an early stage, the Bothia originating from Tibet immigrated too. The coexistence of peoples was peaceful, and the establishment of the Kingdom of Sikkim in 1641 united the region. Since Sikkim had access to Tibet in a commercially strategical way, it had been repeatedly entangled in territorial conflicts in the subsequent years. Eventually the British brought, after taking over the country, various ethnic groups originating from Nepal into the region, as soldiers and also as agricultural workers.

From them emerged the present Gorkha people. The members of the British East India Company through then discovered the area as a getaway at about the mid-19th century, because the air here was not as harsh as in higher elevations, but much cooler and with lower humidity as in Calcutta. It were then also the British, who initiated the first tea cultivation here - the tea, which has made the region world famous today. With the end of the British occupation, and the establishment of the autonomous Republic of India in 1947, Darjeeling, which actually belonged to the kingdom of Sikkim, was declared as a District of the State of West Bengal, which is legally not indisputable. To date, this association is not recognized by all sides; in particular the Gorkha people originating from Nepal insist on exclusive possession, and the establishment of an autonomous Gorkha land.

The economy in Darjeeling is based, not surprisingly, very strongly on the cultivation of tea, but also the breeding and the export of orchids is bringing the region not insignificant earnings. In addition, tourism is an important economic factor, which started centuries ago with the convalescence leave of members of the British occupation forces, and continued by mainly domestic tourists, who enjoy the comparatively cool climate and want to relax in the green mountain scenery. From abroad there are frequently visitors, who want to make trekking tours in the area, starting from Darjeeling - or tea connoisseurs, who would like to see the world famous Darjeeling be rooted, and are seeking to learn its preparation from experts. However, the overall, economic situation of Darjeeling is very tense due to the high population numbers, because political unrest (in the form of independence aspirations of the Gorkha) prevent a continuous build-up work.

Since the majority of the population of Darjeeling is of Hindu faith, primarily the great festivals of this religion are celebrated, according to the current lunar calendar. There are many regional differences in the importance of the individual holidays, as the Hindu festivals are each dedicated to a particular deity or a related event with him/her. Depending on what god or what goddess is especially venerated in a shrine, his/her day of honor is committed with particularly elaborate ceremonies and celebrations by the Hindus who live there. The reclusively living Lepcha and Bothia are practicing mainly the Buddhist faith, so that if appropriate, there is a possibility to participate at respective solemn ceremonies in their villages.