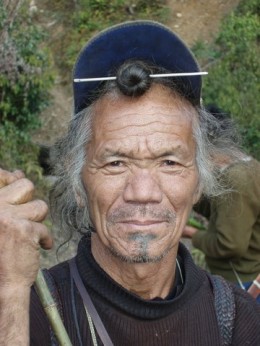 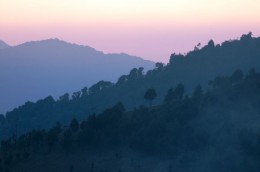 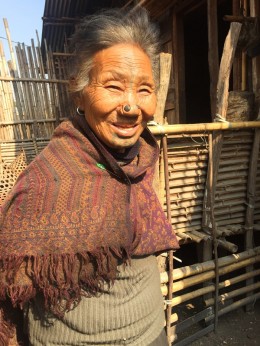 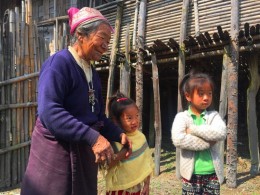 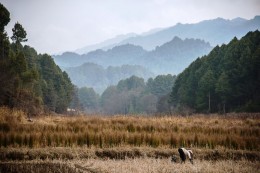 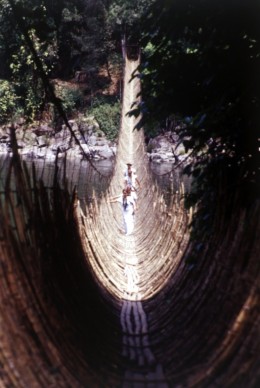 Tucked away in the north-eastern corner of India is Arunachal Pradesh, framed by the provinces of Assam and Nagaland, as well as Bhutan, Tibet and Myanmar (also Burma or Birma). The state, which is very sparsely populated, not only by Indian standards, (17 inhabitants per square kilometer - Switzerland 200, Germany 226) extends over almost 84,000 square kilometers from the Himalayas to the lowlands in the south. However: as small as the number of its inhabitants, as diverse is their ethnicity, language and religion. Because the approximately 1.4 million inhabitants are distributed among 100 indigenous tribes, a quarter of which has more than 5,000 members; the remaining 35% of the population are immigrants mainly from other parts of India. Those who are interested in visiting indigenous peoples, and in accompanying them in their tradition and an everyday life, that is so different from ours, will get that opportunity in Arunachal Pradesh.

The greatest wealth of the secluded, and in many parts for vehicles undeveloped region is, besides its diversity of cultures and tribal communities, especially the pristine tropical and subtropical rain and cloud forests with their typical flora and fauna. The cloud forests are among the most endangered ecosystems of our planet, which doesn‘t only for ornithologists and botanists make a vacation here into something unique and very special. Arunachal Pradesh offers to real nature enthusiasts an unforgettable immersion into pristine wilderness, and the tingling taste of adventure - but also the colorful, bustling life in the few cities is an impressive experience.

In the far west, in the temperate climate of the mountains, the Buddhist monastery Galden Namgyal Lahtse invites for example, which was built 400 years ago, to visit the birthplace of the 6th Dalai Lama. Around this monastery, the small town of Tawang was built, which is today giving its name to the whole district. Primarily the Monpa settle here (also Menba, Monba or Moinba), a primordial tribe of the region, that has been separated by the closure of the border between China and India into two cultures. In no other state in India, the fine balance between progress and the preservation of traditional roots is as visible as here. The land of Arunachal Pradesh seems to the visitor mysterious, powerful and beautiful - but also dramatic and changeable. How long can the forests on the mountain slopes be preserved in their original biodiversity, despite forestry use? Will the peoples succeed, in spite of all their differences, and in spite of the demands for the territory of the country, both from India and from China or the Tibetan Autonomous Republic, to continue the peaceful coexistence?

We are happy to to tread with you the bridge into the land where the sun of India rises first. It offers a pleasantly temperate to tropical climate, exuberant, primordial nature and simple, humble people whose hospitality will enchant you. If you are ready to cut back on your comfort, the accommodations and in remote areas also on the standard of hygiene, and if you are able to adapt the details of your trip in a flexible way to daily changing local conditions, Arunachal Pradesh will reward you with an unparalleled adventure holiday, away from the crowds, including enriching encounters with indigenous people and a nature experience how it is possible only in very few regions of the world at all in this originality.

In Arunachal Pradesh you can experience the best travel climate from October to April, the conditions are ideal in the period from October to November and from March to April.

The inaccessible landscape of Arunachal Pradesh has brought about a thriving culture of different peoples with individual traditions. In the state are living a total of approximately 1.4 million people, about 35% of the population are immigrants from Bangladesh, Chakma, Assam and Nagaland. The original tribal population consists of 25 different major tribes, each with more than 5000 members, and about 75 smaller tribes. The majority of this population has tibetan or thai-burmese roots. In the far north and west live the Monpa and Sherdukpen, significant tribal communities, who are quite closely related to the tibetans.

The community of the Sherdukpen lives south of the Bomdila mountain range, in the valleys of Tengapani, and is similar to the Monpa. In the lower locations in the South and East are found most commonly small mountain tribes who speak up to 90 different languages and dialects. The main tribes of Arunachal Pradesh, each with at least 5,000 members, include the Abor, the Adi, the Aka, the Apatani, the Dafla the Kalong the Khampti the Mishing the Monpa the Nocte, the Nyishi the Tagin the Tangsa and the Wancho.

Many of the native tribes practice a belief in spirits, at the center of which is the worship of the sun and the moon. But the Monpa and the Sherdukpen in the districts of Kameng and Tawang have taken over, due to their proximity to Tibet, the Tibetan Mahayana Buddhism centuries ago, while the Khampti in the the district of Lohit are practicing Hinayana Buddhism. The ancient belief system of the Noctes and Wanchos in the Tirap district is mixed with Hindu elements. The predominant proportion of Hindus pose in Arunachal Pradesh immigrants from surrounding parts of the country / countries, just like the nearly 20% members of the Christian faith.

Today, the food supply is quite varied, especially in the settlement areas with predominantly immigrant population and also Western dishes are quite common - especially in guesthouses and restaurants. The traditional dishes in Arunachal Pradesh are usually quite mild and flavored with local herbs and bamboo shoots. Green leafy vegetables, corn, rice and lentils are widely used in the kitchen, plus there is meat, fish and eggs. The tribal population eats today almost exactly as it was doing hundreds of years ago, and accordingly uses the ingredients that their direct environment offers - not always do  these appear tasty to the western palate. But a local specialty which you should certainly once try during your holiday in Arunachal Pradesh is the ,Apong' beer which is brewed from rice and millet.

Thanks to its isolation in a rather inaccessible mountain region, Arunachal Pradesh is still one of the most diverse and unspoiled natural paradises on earth. The basis for the development of the enormous biodiversity, the height differences in the country, extends from only slightly above sea level to the over 7,000 meters above sea level high peaks of the eastern Himalayas. The country has a uniquely diverse landscape, glaciers and alpine heaths over temperate deciduous forests to subtropical rainforest, and a correspondingly wide range of flora and fauna. For example, Arunachal Pradesh is the only state in which tiger, leopard, clouded leopard Neofelis nebulosa and snow leopard occur together.

Here live elephants, sambar deer Rusa unicolor, various types of Indian muntjac Muntiacus, countless species of monkeys, for example slow lorises Nycticebus and bear macaque Macaca arctoides - the biodiversity among mammals alone is immense. Arunachal Pradesh is further home to many rare and mysterious birds of Asia, including the imperial heron, white-winged (wood) duck, bengal bustard, dark- backed swift, beautiful nuthatch or spotted marsh- babbler. Several of them have so far been observed only by a few ornithologists, many of the more than 500 local bird species are threatened with extinction.

The high density of pheasants, whose kinds differ depending on the climate, is unique in Arunachal Pradesh. Of course, here also live amphibians, reptiles and countless species of insects - the colorful abundance of different butterflies enchants the landscape, and provides in addition to the flowers of many different trees, orchids and other plants for multicolored speckles in the rich green of the forests.

The almost unknown Namdapha National Park borders on Myanmar and features over an area of nearly 2000 square kilometers an amazing fauna, many mammals and birds. In the valleys, the tropical rainforest offers a rich plant life, and ornithological specialities. The National Park extends from the lowlands up to 4500 m in height; Here live all four species of wild cats found in India, many rare bird species such as the Hodgson’s hawk- eagle Nisaetus nipalensis and further interesting animals, such as elephants, bears, takins, musk oxen, slow lorises Nycticebus coucang, red panda Ailurus fulgens and several species of monkeys.
The Mouling National Park with nearly 500 km² area is located in the district of Upper Siang in the central north of the state. It also hosts a rich flora and numerous bird species.
Both national parks are accessible almost exclusively on foot, within their borders, the road network is even less developed. Within their territory are settling some of the small indigenous communities.

Trekking in the mountains of the Tawang region not far from Tibet and Bhutan, via several passes up to 4700 m altitude. The path leads past alpine lakes, through conifer and rhododendron forests, yak pastures and heaths. Here one has repeatedly a fantastic view of the snow-capped Mt. Kangdo (7090 m above sea level) in the Himalayas. In winter there is the possibility of shorter hikes in the lower regions.

The majority of the indigenous peoples living in Arunachal Pradesh were up to the 20th century without writing, so that numerous archaeological finds are the only witnesses of the rich cultural heritage, and point to a quite early settlement of the fertile valleys. The region was spared from territorial battles of the surrounding states for a long time, came only in the late 17th century into the sphere of influence of the Tibetan Gelugpa school and was finally governed from Lhasa. After the invasion of the British in Tibet, these controlled the region. In the treaty of the Shimla Conference in 1914, which is not recognized by China, the domination was laid down. As a result, the British formed a statelike territory in the area, which was, however, hardly to control due to the inaccessibility and the nearly 100 secluded tribes living there.

After India's independence in 1947, the government of the young republic attempted an official integration of the territory again. As a result, an open war with China broke out in the border region in 1962, during which Chinese troops penetrated as far as the Assam plane, but then retreated. 1972 the territory received from India the status of a Union territory, Arunachal Pradesh is officially since 20th February 1987 an independent Indian state. As before, the boundary line is not accepted by China.

The economic development of Arunachal Pradesh is difficult, so that the state mainly lives from agriculture to the present day. However, the cultivation of rice, maize, millet, wheat, lentils, sugarcane, rapeseed, pineapples, oranges, lemons, plums, pears, cherries, apples and peaches just covers the needs of the own population. In certain areas, forestry and mining are operated, moreover there are many artisans. Tourism is a small source of income in the services sector. Since some years,  efforts of the Indian government exist, to build hydropower plants along the rivers in Arunachal Pradesh, to improve the all-India power supply and enable the region, also thanks to the achieved income, to get a closer connection to the modern infrastructure, the health and educational system. However, territorial claims of the tribal population - out of fear of possible destruction of the habitat, but also from purely monetary interests - prevent these projects largely to this day.