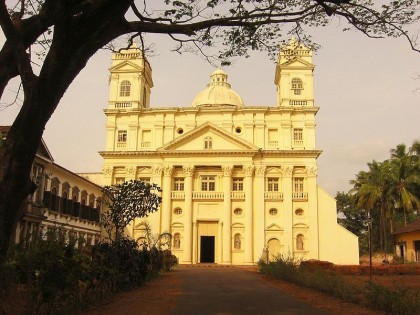 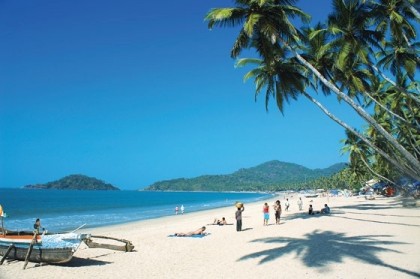 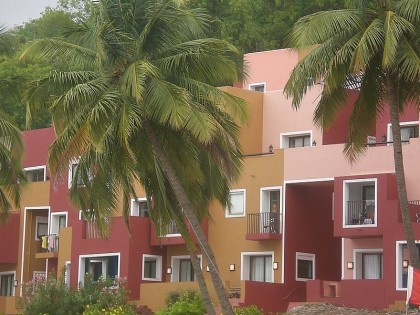 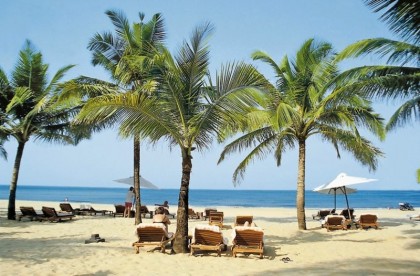 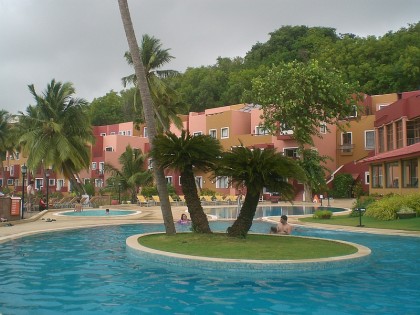 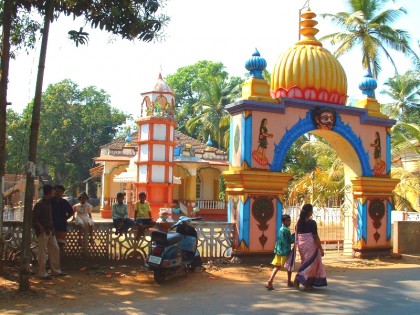 Situated directly at the Arabian Sea in the southwest of India lies a narrow strip of land with endless beaches, countless palm trees and friendly people - Goa, the smallest state of India, which until 1961 belonged to Portugal. The population has maintained until today the mediterranean, relaxed lifestyle of the Portuguese. Along the coastal region, which is covered with coconut palms and banana plants, there are numerous picturesque fishing villages, which invite you to visit.

A trip to India can be ideally complemented with a few relaxing days on the beaches of Goa. The beaches of North Goa are today a center for package tourists; the streets are lined with many small shops and restaurants, and those wishing to do something in the evening are in the right place here. The variety of music, in which one plunges here leaves probably no one untouched - quickly one catches oneself with a bobbing foot or closes ones eyes and turns slowly in a circle to take in the many facets.

If peace and quiet is your priority, so the south is recommended as a base for your holiday in Goa, which has been discovered much later by tourism. You sense here the genuine Goa, discover small fishing villages among palm trees, admire beautiful Goan villas and can be infected by the slow way of life of the local population. The best hotels have established themselves on the picturesque, endless beaches of south Goa, and guarantee carefree, luxurious beach holiday with all comforts.

Anyone interested in the culture of the country and its people is also at the right place in Goa. The historic center of the capital Panaji belongs to the world cultural heritage, as well as the former capital of Velha Goa, in which the many churches and cathedrals impress not only architecture-lovers. In the more rural areas one can find to this day Hindu temples from ancient times, which also invite to sightseeing, and in which one breathes a unique atmosphere of deep religiousness.

Vacation days in Goa are ideally suited for a purifying detox- cure using traditional Ayurvedic methods, Ayurveda has here a long tradition of healing. Or you attend a yoga class, which teaches to take the soothing, deep relaxation also into ones everyday life. Learn the subtleties of Indian cuisine at a cooking class, and experience on a spice farm interesting facts about the ingredients of the perfect curry mixture.

Escape our cold winter and travel to the seaside, in the months from October to May prevails in Goa wonderful beach weather. A special highlight you will experience in March, when the giant turtles come to lay their eggs on the beach. The months from June to September are due to high humidity, sometimes very heavy rainfall and winds that stir the sea, less suitable for a beach holiday - but if you can be without bathing in the sea, and are interested for example in a cooking class, an Ayurvedic cure or a yoga class, these months are nonetheless great to take time out in Goa.

Goa is the richest state in India, so that every year countless hopeful persons are immigrating from the surrounding, poorer areas of India. The here prevalent high standard of living has led to the situation, that today's population of Goa consists of about more than a third of immigrants. Also descendants of the here long time reigning Portuguese are to be found in no small numbers, especially around the capital of Panaji they represent a fairly high proportion of the population. Of the nearly 1.5 million citizens of Goa belong so only about 25,000 people to the Gauda, who live in the remote mountain land and are probably the last remaining indigenous people.

Correspondingly, the religion of the population is constituted. Although the majority is of Hindu faith, there is with almost 30% an in India leading percentage of Christians (Portuguese catholics), and a smaller part of 7% Muslims. The Buddhist shamanistic faith of the Gaudas remains almost entirely limited to the mountain regions. The European influences from Portugal, which for centuries dominated in Goa, as well as the fresh wind that in the 1970s the individualists and hippies brought into the country, create an unique atmosphere in the streets.

Also regarding the availability of food, the omnipresent western influence and the long tradition of tourism in Goa shows. Naturally one can get as holidaymakers also typical Indian dishes (curries are available in all imaginable variations), however the range of western meals is above average. Highly recommended is the wide range of fresh seafood and fish in various forms of preparation, there are for example different Goan recipes with shrimp as the main ingredient, which have an incomparably fresh and exotic flavor. As a result of the good volume of imports, year-round fresh fruit and vegetables are available, and also the supply of non-vegetarian food, even with beef, has a particularly broad spectrum. But as everywhere in India, the rule applies for Goa too, that no uncooked and unpeeled fruit or vegetables should be consumed - all bacteria, which are completely normal and harmless for local people, have on our in this matter untrained digestive system often a resounding and painful impact.

The original, natural landscape of Goa is due to the small size of the state and the relatively advanced stage of industrialization all in total only to be found on around 40% of the territory. But especially in the higher elevations, which are not well suited for agriculture, still dominate the old, beautiful and mystical primal forests the landscape. Evergreen, damp forest of magnolias, sal, fig and teak trees with a dense undergrowth of bamboo and ferns, adorned with garlands of lianas, is home to many different animal families. In addition to the vociferous welcome from hordes of monkeys and prosimians, which one however, often encounters outside the forests, resound the various voices of over 420 different species of birds. Specifically protected are the gray langur, a kind of prosimian which is sacred to the Hindus, and therefore will not be forced out of the cities.

Mostly as part of a domesticated herd, but due to the size no less impressive are the Gaurs, respectively Gayals, the largest bovine animals existing worldwide. Less one would like to encounter the Indian leopards which are still living in the jungle - even if they are now actually to be found solely on the territory of the Bhagwan Mahaveer sanctuary. But also others predators live in the woods, such as sloth bears Melursus urinus, striped hyenas Hyaena hyaena or gold jackals Canis aureus. Also the Cobra known from Kipling's "Jungle Book" found refuge here, so their most important natural enemy, the mongoose, is a welcome sight throughout Goa. Although Goa is among the most modern Indian states, and mining and industry have changed a part of the landscape, some places can be found where, away from the lively bustling coastal strip, the presence of people is not seen or felt, and which have been able to keep their old magic.

Above all, it is the Bhagwan Mahaveer Sanctuary / the Mollem National Park, which provides on an area of 107 km² since 1969 the most important refuge and permanent home for the various animal species of Goa. Those who wish to immerse themselves away from the picturesque beaches and the extraordinary atmosphere of Goa in the pristine atmosphere and the nature of this region, can in this National Park, for example, have justified hope to be impressed by the beauty of graceful large cats. Especially ornithologists will be fascinated by a visit to this national park, because it is home to over 400 different species of birds, and anyone who travels in the area during the blooming time of the magnolias at around 900 m above sea level, experiences an intoxicating feast for the eyes and nose.

The history of the present-day Goa is historically quite well documented, and there is already evidence from the period a few centuries before Christ. At that time Goa was ruled monarchically, but it was also quite cosmopolitan. Although historically Hinduism played an important role, Buddhism and other religions were always accepted as equivalent. Because of the - at that time - fertile soils of the region, and especially the connection to the ocean, however, territorial fights had always needed to be executed, which was limited in earlier time to conflict between the surrounding smaller kingdoms and principalities or quarrels within the ruling family.

In the Middle Ages eventually, North Indian tribes won the upper hand, and maintained control of the government, until the Portuguese landed in 1510 on the coast of India and colonized the countries - as it at that time finally happened throughout the Indian subcontinent. This overlordship of the Portuguese in Goa existed also after the independence of the other colonies, until the end of 1961, only then the troops of the young Indian republic also marched into this region, and annexed Goa in 1987 finally as an equal state.

The influences of this long European domination are evident in the for Indian standards quite open, and also in terms of religion very western / Christian-oriented culture. Goa has been developed for tourism relatively early, as early as the 1960s, European and American hippies discovered the wonderful beaches and landscapes. Among other things, the relatively large number of "individualists" who immigrate to Goa since that time, ensured for quite a western-developed infrastructure.

As almost everywhere in India, the job market has an emphasis on agriculture, even if where the once fertile soil was today the areas of Goa are, which are the most densely populated, and therefore have become unsuitable for cultivation. On the remaining arable land (about 30% of the total land area) are still sugar cane, rice, cashew and coconut being grown, less vegetables and fruits such as banana, pineapple, mango and jackfruit. But a more important mainstay of the agriculture in Goa are the fisheries, here income is being generated, which includes an export volume.

Together with the mining of iron ore and manganese - Goa is exceptionally rich in raw materials - and the products of the amazingly extensive industrial sector (metal processing, wood, paper, textile, food and beverage, plastics, rubber, chemical, pharmaceutical and electrotechnical industry are located here) these productions generate about half of the gross domestic product. The main economic pillar of Goa today is the service sector, which is composed mainly of insurance, banking and real estate business and tourism. The tourism sector accounts for an impressive 20% of the gross domestic product, Goa has become, thanks to its beautiful beaches, the richest Indian state.

The secular holidays, that fall on fixed dates, and that are celebrated in Goa throughout the year, are New Year's Eve and New Year, followed by Republic Day on January 26th. On August 15th, the independence from Great Britain is celebrated throughout India, followed on October 2nd by the birthday of Mahatma Gandhi. Almost uncharacteristical for India, due to the equally atypically large proportion of Catholic Christians, but of course, also Christmas is being celebrated in December by a significant part of the population. Otherwise it is the Hindu festivals, with their focus on the lunar calendar and therefore changing annual dates, that ensure  a particularly colorful life on the streets and many cultural events. We gladly inform you personally about what festivals fall in your travel time window, and the participation in which ones of them is personally particularly interesting for you!