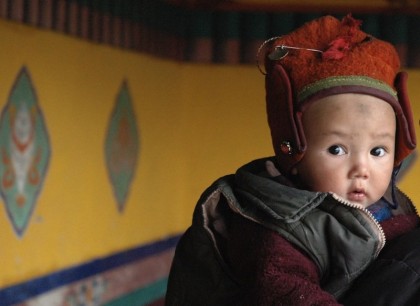 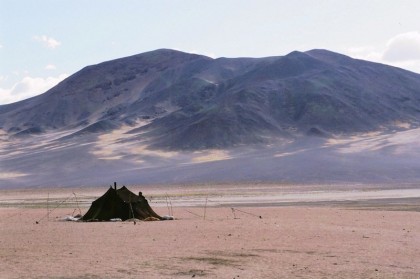 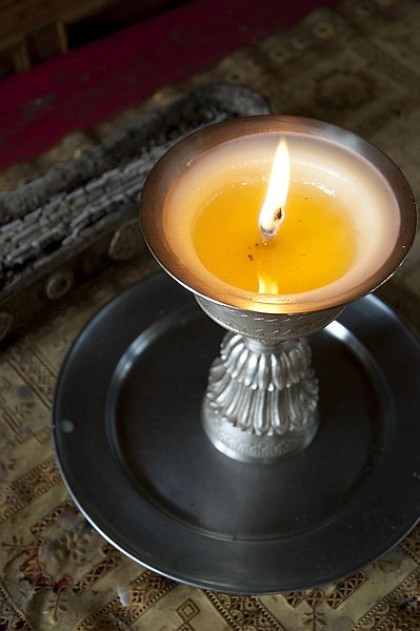 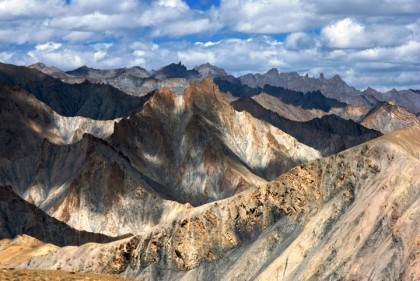 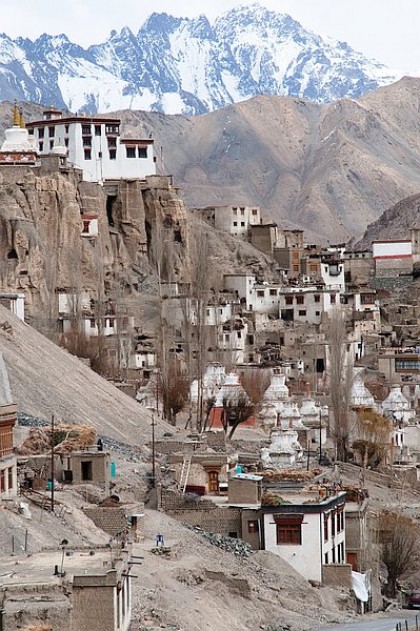 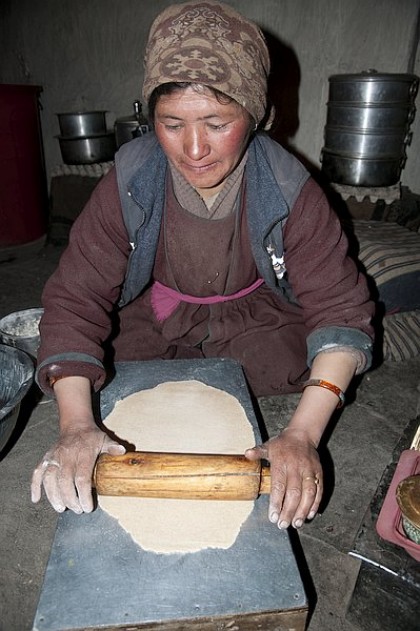 Ladakh, India – In the Spectacular Mountain Land close to the Sky

Surrounded by the mightiest mountain ranges of the world, in the northernmost, and rather difficult to access Indian state of Jammu and Kashmir, is the Ladakh region, which counts as one of the highest inhabited regions on earth. The sparsely populated, barren valleys are located at an average altitude of 3500 m above sea level, and are mostly very dry, as the hills of the Himalayas let the monsoon rain out beforehand. However, the various water courses, fed by glacier rivers such as the Indu, Zanskar, Nubra, Shyok and Suru provide a sufficient amount of water available to persue agriculture in their valleys. Like oases appear Ladakhs quaint mountain villages, which are bordered by a mosaic of green fields, in the vast, spectacular and barren mountain desert of the high plateau. On many mountain tops in this isolated and magnificent landscape are castle-like monastery settlements, and sky blue lakes are  contrasting with the white peaks, the vast plains, high passes and deep canyons.

An unique, highly civilized culture has developed here, which is strongly influenced by the teachings of the Tibetan Buddhism. In fact, the Ladakhi language is considered an older form of Tibetan, which is only one of many striking similarities between the two civilizations. The deep roots in Tibetan Buddhism characterize the spirit of the amiable Ladakhi, and is also reflected in the serene friendliness and the close ties between people and the nature. In Ladakh one finds, in contrast to Tibet which is battered by destruction, many monasteries, which are centuries old, but very well preserved and are bustling lively. Especially in the fall and in the winter months, colorful monastery festivals take place, impressive mask dances are being organized in the monastery courtyards. We are happy to integrate the visit, respectively the participation in such a festival, into your cultural travel program, to build with you a particularly colorful bridge to Ladakh.

For travelers the Ladakhi highlands represent in any case a particularly impressive goal, the options for the customization of a holiday are very diverse here. To trekking travelers who are fit enough to be in high altitudes, the fascinating mountains with their unique flora and fauna reveal themselves at first hand, especially the bird life is astonishingly varied, ranging from thrush, finches and redstart species over hen and corvid species as well ruddy shelduck and bar- headed  geese until rare black-necked cranes. The diversity of mammal species is somewhat lower due to the climate, but nevertheless provides especially the Hemis National Park a home to various kinds of sheep and goats, Tibetan antelopes, argali, Eurasian lynx, Tibetan wolves, and even the rare snow leopard. If you want to move the immersion into the culture and into Buddhism into the forefront of his journey, you get the best insight into the everyday life with a, due to longtime partnership trustingly relaxed, stay with a host family.

To Ladakh one can travel throughout the year. The warmest and sunniest it is from June to September, during the day the temperatures are from 20°C to 30°C. But in the evening, in the shade and in the high places it stays cool. The climate is dry, and only sporadically one can expected rains, in late September then there may be first snowfall. From the end of October to the end of May the arrival is due to the snowy passes sometimes only possible by air, but not on land. In winter, temperatures can drop down to -40°C, depending on the altitude, in the capital Leh to C -30°C. But the perceived temperature is, in appropriate clothing, because of the extreme dryness higher, and snow is rare in the valleys. A trip to Ladakh during the winter is recommended, because of the many monastery festivals, that take place away from the tourist bustle.

Today the Ladakhis derive almost exclusively from two ethnic groups: the Tibetans and the Dard, a people from what is now Pakistan. The cultures have united long ago, differences can be found almost exclusively in the practice of the religion: about 84% of the Ladakhi in Central and Ostladakh are Buddhists, while a 15 percent minority of the Ladakhis, especially in West Ladakh, belongs to the Shia Islam. The Muslim faith has a long tradition in this region: most Muslims of today are descendants of the immigrant Dard people. In addition, there is one small minority of Hindus and Christians. The Christian faith was introduced by missionaries from Saxony in the 19th century in Leh, the devout Hindus are mostly immigrants from other parts of India. Among the Buddhists, the majority belongs to the Mahayana Buddhism, but there are also followers of the Hinayana Buddhism. All schools occurring in Tibet are also represented in Ladakh and contain elements of the old Tibetan Bön religion.

The the Ladakhis themselves eat very simple food. Due to the barren landscape, in which not too much grows, there is a focus on the processing of legumes, which can be stored well. So is "Baba", a mixed flour with mashed peas, a very typical example of the local cuisine. Also "Thupka", a simple soup of legumes, onions and homemade pasta is a common dish among the the Ladakhis. In summer, the supply of imported fruit and vegetables is a diverse enrichment of the menu; scarcer it is at the end of the long winter, when the passes are covered in snow. In the larger towns there are today, as an adaptation to the needs of tourists, a large number of restaurants and food stalls offering Indian, Chinese and Tibetan cuisine. You should definitely try the "butter tea", where black tea, butter and salt is stamped in a wooden cylinder. Otherwise, as everywhere in India, one has to be careful to not eat unpeeled or uncooked vegetables and fruit food.

The dry, meager soils in Ladakh pose a challenge to Mother Nature which she has mastered superbly: the vegetation is indeed predominantly low, and trees are growing almost exclusively in the vicinity of settlements, where man has planted them, but the variety within the bush vegetation and grassland which is permeated with herbs and flowers, is highly impressive. Each small watercourse is lined with blossoms of anemones, asters, geraniums, blue poppies and edelweiss, the more modest thistles, sea buckthorn, rose bushes and especially juniper are spread everywhere. Up to an altitude of 5000 m above sea level stretch wide grasslands, and are supplying herds of yaks, wild donkeys, sheep and goats, argali and Siberian ibexes. Also medicinal herbs grow here in an impressive variety. During a trek in Ladakh one has great chances to get past herds of wild blue sheep Pseudoisnayaur or to encounter groups of the equally rare giant wild sheep Ovisammon. Ornithologists are pleased with sightings of golden eagles and bearded vultures and various species of Partridge, also the Tibetan snowcock or the Himalaya snowcock and the rare black-necked crane can be observed. Other rare species, such as the snow leopard or the brown bear Ursus arctos, have found safe havens in the protected areas of Ladakh, their populations, however, are small.

The most important protected area in the region of Ladakh is certainly the Hemis National Park with an impressive total size of around 4100 km², which is situated at an altitude between 3300-6000 m above sea level. Here live, next to an estimated 40 snow leopards Panthera uncia, mainly brown bears and wolves, which among other, are hunting the blue sheep Argali ovis ammon living here, and the about 300 Ladakh wild sheep, urials. But also red foxes, and the cute long-tailed marmots Marmota caudata live in this national park around the Stok Kangri, and enrich the holiday experience Ladakh with fascinating wildlife viewing.

Ladakh, as an independent Buddhist kingdom, had been exposed to a number of attacks from the neighboring countries in the past, especially Tibet tried to conquer the country time and again. Through an alliance with the north Indian Mughal Empire, independence could be secured from the 17th century onwards until the 19th century. Later the British finally annexed a large portion of Ladakh into their colonies, which also led to the inclusion into the current Republic of India. Other parts of the former kingdom belong to Pakistan and the People's Republic of China today. In 1995 the "Ladakh Autonomous Hill Development Council" was established, as a first step towards an again greater autonomy. Although the region is already equipped with full powers, the idea of a Union territory of Ladakh wins since 2000 continued impetus.

Besides trade, the international tourism and the military as an employer, agriculture and animal husbandry (mostly yaks, but also cashmere goats) continue to play an important role to secure the livelihood. Terraced fields with sophisticated irrigation systems allow the cultivation of grain and vegetables, despite the low rainfall at altitudes of 4,500 m. apricot and walnut trees thrive in low and sheltered terrain during the short summer season. In Ladakh neither mining nor processing industry has been able to assert itself, the area is just too isolated and inaccessible.