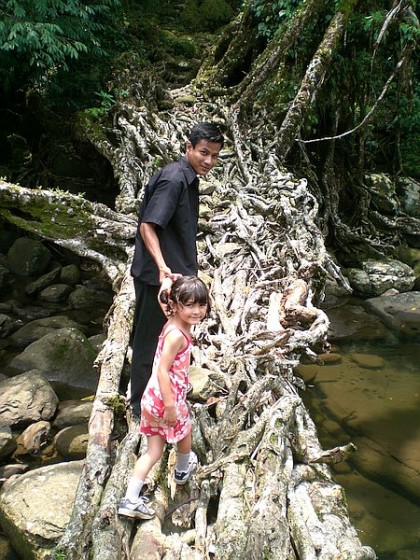 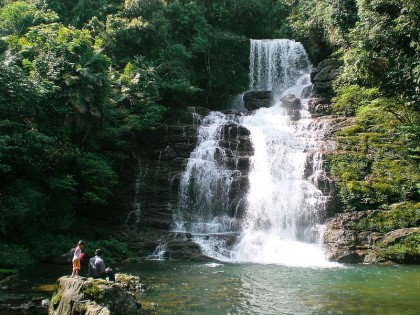 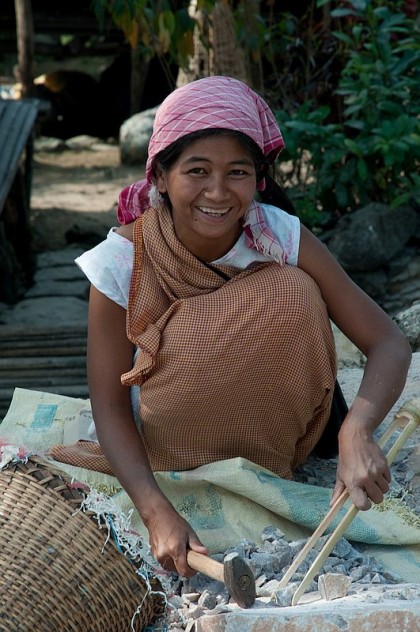 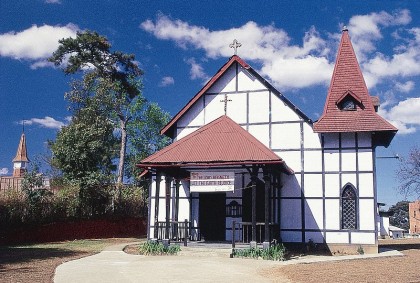 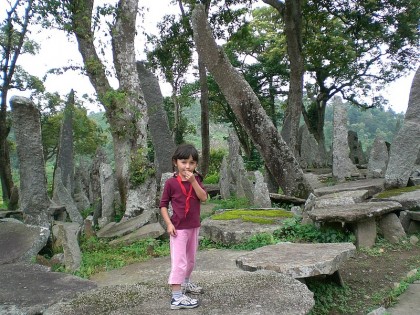 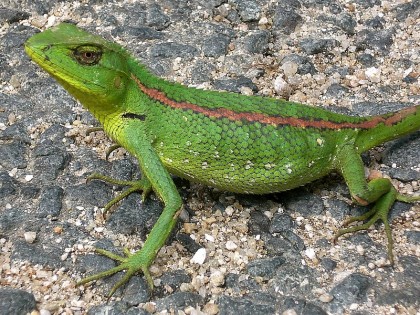 Meghalaya – Welcome to the House of Clouds

Meghalaya is a small state in the Indian northeast, which is still hardly touched by tourism, embraced by its sister-state of Assam in the north and Bangladesh in the south. It is home to the tribal communities of the Khasi, in which the daughters inherit, and which is one of the few nations worldwide, in which women have perhaps even a trace more than equal rights. Meghalaya is often referred to as the " Scotland of India ", and its green rolling hills full of bizarre limestone formations - but also the amount of precipitation - confirm this association immediately. Translated into the language of the indigenous people, the name Meghalaya means "house of clouds", and the accuracy of this description appears the latest, when one gets the view of the plateau of Cherrapunjee above the surrounding lowlands, which appears to be steaming from evaporating dampness. Meghalaya fascinates with its rolling hills full of forests, pastures, rice fields and farmlands. Typically, and welcoming travelers picturesquely, are the holy forests (sacred groves), the crystal-clear rivers, waterfalls, which shoot downward from the Meghalaya plateau towards Bangladesh, as well as the lifestyle of the locals which is close to nature.

The population of Meghalaya is dominated by the original tribal peoples, the Khasi, the Janitias and the Garo. These are people largely converted to Christianity, they are living in peaceful harmony with nature, and welcome you warmly in their country. In particular a visit to a village of the Khasi is amazing and fascinating for those interested in culture, because they live a matrilineal structure, which is rooted in ancient times. High priestesses occupy a powerful status in the community, and traditionally the youngest daughter inherits the belongings. Apart from this, the Khasis belong to the most astonishing bridge builders in the world. They pass the roots of living rubber or banyan trees through hollowed trunks of betel nut palms, and lay them over water courses. These form the base of a living bridge, once they have reached and grown into the soil on the other side. The bridge is becoming increasingly stronger by the interweaving of other roots. The architectural collaboration of man and nature creates bridges which fortify and regenerate themselves, and some of which are far more than 100 years old. Even the Jaintia people created the impressive monolith gardens, solely with the resources of nature, where stones which are weighing several tons are vertically-arranged, and guard over lying the stones surrounding them, and commemorate certain family members. For an adventurous tingling provides a visit to a village of the Garo, if you recall their - long enough past! - history as headhunters. The red-colored mouths of many locals have no connection with that past by the way, but are caused by the here widespread chewing of betel nuts.

Thanks to the pleasant climate of the recommended travel time, the hilly landscape of Meghalaya can very well be discovered by bicycle. On cycling tours during your active holiday you will experience the extraordinary wealth of butterflies and nocturnal moths and enjoy the wide panorama of rolling mountains and crystal clear water courses and cascades. Even if one wants to go down to the underworld when crossing his bridge to the Indian east, a holiday in Meghalaya is also recommended, because more impressive stalactite caves are very hard to find. We are happy to integrate customized, professional cave exploring on foot and also by raft into your trip.

The climate for a vacation is ideal from October to November, and from March to June. In winter, usually low temperatures predominate, during the summer (especially in July and August) Meghalaya is afflicted by the monsoon. Occasional showers all year are to be expected, with average rainfall of 12,000 mm annually, Meghalaya is the most humid state of India.
The year is divided into three seasons: summer (warm) March to June;  monsoon (rainy and warm): July to September; winter (cold, especially at night and early in the morning): December to February.

Meghalaya is ethnically, as it is typical for this region, a multifaceted state. To date, the major part of the locals belong to one of 17 indigenous peoples, in which the tribes of the Khasi dominate (settlement area primarily in the east of the country) and the Garo (settlement area primarily in the west) with a total population of nearly 70%. A visit to particularly these tribes is very exciting for those interested in culture, because they are two of the few matrilineal societies of our earth, where priestesses and clan mothers have a high hierarchical importance, and in which girls inherit the belongings of the family, and the husband traditionally shifts in with his wife. However since both the Khasi and the Garo have been proselytized during the British colonial period, and today many are converted to the Christian faith, this rare lifestyle loses more and more its importance. But a part of especially the Khasi practices even today the traditional animistic beliefs "Niam Khasi", and lives most clearly in the matrilineal culture. Originally this female-dominated lifestyle was also customary for the Jaintias (Pnar) and the Garo. Among the Jaintia people especially the tradition of "visiting marriage" prevailes to this day, that means husband and wife remain in their parents' homes for the first years after their marriage, and fulfill the daily duties in their parent family. Often the spouses  see each other every few days or regularly over night. More than a few members of the Jaintia practice, alongside the official association to Christianity, also the traditional tribal religion "Niamtre", a nature religion which is based on the belief in a supreme God who propagates mutual appreciation and respect among all human beings as the basis of ones own conduct of life, as well as the respectful relationship with nature. Quite similarly structured is the original faith of the Garo, in whose tradition several other gods are subordinated to a supreme creator, who can be called via spirit rituals. But even this tribal faith has massively declined in importance in the course of christianization. Only about 20% of the inhabitants of Meghalaya live in one of the cities, these are mainly people descending from Bengal, Nepal and from the rest of India. There one can also find Hindu and Muslim religious centers.

The nutrition of the population of Meghalaya is, thanks to the fertile soils, traditionally diverse and includes as a staple food rice, which is served as a side dish, or cooked in various curry dishes. The menu is supplemented by various vegetable and fruit varieties. Particularly varied is the offer of different kinds of meat, as in the predominantly Christian population no religious restrictions prohibit the consumption of for example beef. The European palate will be pleased that the meals in Meghalaya are not above average spicy, also are in the cities and in many guesthouses now international dishes available - also thanks to regular imports. Adventurous vacationers might want to join the chewing of betelnut once after the meal, which enjoys a similar status here, as in Italy the espresso after dinner - and also has a similarly stimulating effect. The red coloration of the mouth, which, of course, is especially noticeable on European fair skin, however must then be tolerated!

Whoever is making holidays in Meghalaya can look forward to an exceptionally diverse and primordial nature. Almost 70% of the national territory is covered by dense forests, the trees consist of mainly teak and sal trees, where 325 different species of orchids are growing on a large area, and in whose protection live more than 660 different species of birds; 34 of which are protected worldwide, nine are threatened with extinction (for example the manipur bush quail Perdicula manipurensis, Bengal bustard Houbaropsis bengalensis or imperial heron Ardea insignis).

Carnivorous plants, like the unique Nepenthes khasiana (a subspecies of the pitcher plant) try to lure one of the many representatives of the insects into their fangs, before for example, one of the species of lizards manages to do so. Crocodiles and tortoises live in watercourses and ponds, just like some of the snake species which are native here (Indian cobra, king cobra, various asps and so on).

The Nokrek Biosphere Reserve in the West Garo Hills and the Balaphakram National Park in the South Garo Hills are probably the most biologically diverse areas of Meghalaya. Moreover Meghalaya features another three nature reserves, the Nongkhyllem Wildlife Sanctuary, the Siju Sanctuary and the Bhagmara Sanctuary. Some areas of the forests (the so-called "sacred groves") have religious significance and may therefore not be entered by visitors, this is exclusively reserved for shamans and occasional tribesmen for purposes of conducting ritual ceremonies. Due to the remoteness of Meghalaya, and of the autonomy of the tribal people, which often prevent industrial use of the country, the original multiplicity of nature, the impressive biodiversity, is retained almost throughout the territory of the state.

A holiday in Meghalaya is ideal for hiking, and for easy to moderately demanding treks through the beautiful landscape of mountains and high plateaus. Juicy-green meadows, which are extending over rolling hills, interrupted by rocks that are looking like flung there, crossed by crystal clear streams and again and again impressive and beautiful waterfalls. The silence of the woods invites you to take a break and enjoy.

Until the arrival of the British in the 18th century were in the region of the present-day Indian state of Meghalaya several smaller tribal kingdoms. The indigenous peoples, which were peacefully living with nature, had not much to oppose the armed forces of the Englishmen, so that their territories gradually became part of the British colony. Over contracts the tribal chieftains succeeded in the subsequent years of the late 19th century, to keep considerable autonomy upright for their respective people. Independently of this, however, was that Christianity increasingly spread through intensive proselytizing of the population, which drove back the original culture of the people. With the independence of India in 1947, the territory of modern Meghalaya was first placed under Assamese administration, wherein the individual tribal peoples was assured considerable autonomy. However the population felt - and feels – that she is not belonging to the rest of India. Intensive ambitions for autonomy led on 21 January 1972 to the secession of the territory, and the establishment of the present state of Meghalaya.

A lot of the people in Meghalaya work in agriculture and live traditionally from the fruits of their labour. However, the cultivation techniques are only in a few cases sufficient for the production of surpluses and, in particular, the city population is dependent on the export of food products. Partly as a result of the tribes being granted partial autonomy, also the mining of the quite rich deposits of raw materials is seriously impeded, there is great potential for the extraction of coal, sillimanite, kaolin (china clay), granite and limestone, and for the establishment of the corresponding processing industry. However, this rigid attitude of the tribal chiefs protects nature of course, and especially the forests of Meghalaya, which meets the aspirations of the Indian government, to develop tourism as an economic mainstay for the region.

Since a majority of the population of Meghalaya is of Christian faith, the according holidays known from Europe are here considered and celebrated very similarly. Also Hindu celebrations take place according to the lunar calendar. However, a special feature are certainly the traditional celebrations of the indigenous people, which are only partially accessible for visitors. We are happy to elaborate with you personally, on what festivals are particularly attractive and are within your travel time window!